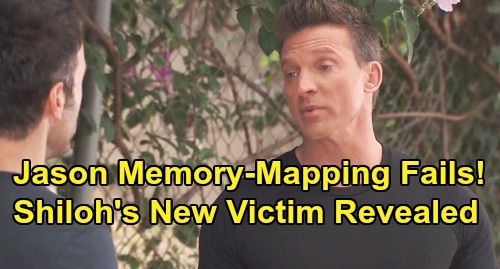 General Hospital (GH) spoilers tease that after Shiloh Archer (Coby Ryan McLaughlin) kidnaps Sam McCall (Kelly Monaco) he will try to use Drew Cain’s (Billy Miller) flash drive on Jason Morgan (Steve Burton). However, there’s a huge flaw in Shiloh’s plan. What will he do when the brain-mapping procedure fails?

Jason has brain damage from a car accident years ago, which is why the brain-mapping wouldn’t have worked on him originally. Unless the writers go for a rewrite, there’s seemingly no way Drew’s memories can be imprinted on Jason. Since Shiloh apparently didn’t get the memo, Jason will likely play Shiloh until Sam can be saved. He may then hope to take Shiloh out.

General Hospital spoilers say Jason certainly won’t let Shiloh get away with this. Sonny Corinthos (Maurice Benard) won’t want Shiloh on the loose either. However, they’d be the prime suspects if Shiloh turned up dead. Shiloh could end up behind bars for kidnapping, but can Sonny and Jason really trust the justice system at this point?

Regardless, first thing’s first here. Sam has to be rescued! Could Jason send someone else to save Sam while he deals with Shiloh? Jason and Drew have been working together lately on the tree-house. They’ve compared notes on Shiloh, and they both have a connection to Sam.

Drew shares a child with his ex, so they have an unbreakable bond and still care about each other. Jason would have every reason to trust Drew to help him out. GH spoilers say Drew will race to the motel room where Shiloh’s staying. Curtis Ashford (Donnell Turner) and Sonny will join him, but Jason might be able to point them in Sam’s direction. She’ll be locked in a freezer somewhere, so she’ll desperately need assistance.

Dr. Arthur Cabot (Time Winters) is now involved, and Shiloh has promised to get him anything he needs. However, Andre Maddox (Anthony Montgomery) perfected this procedure, and he couldn’t pull off the brain-mapping on Jason due to his old damage. That brain damage can’t be reversed, so the procedure still wouldn’t work if written true to GH history.

Shiloh Archer Will Move Forward With His Evil Plan

We should also point out that it doesn’t make much sense for Shiloh to suddenly want this. It’s true that Shiloh could find out where his money is, but the memory-mapping candidate would also learn the truth about Shiloh’s crimes in Afghanistan. It seems like the risks would outweigh the benefits here.

Nevertheless, General Hospital spoilers say Shiloh will move forward with his plan. Will he try to force Drew to step in when his Jason plot falls through? Will Shiloh have to rely on another brain instead? General Hospital spoilers reveal that the unlucky person who will get Drew’s memories mapped onto his brain is Franco Baldwin (Roger Howarth)!

Regardless, it sounds like some exciting scenes are coming up. We’ll give you updates as other GH news comes in. Stay tuned to the ABC soap and don’t forget to check CDL often for the latest General Hospital spoilers, updates and news.