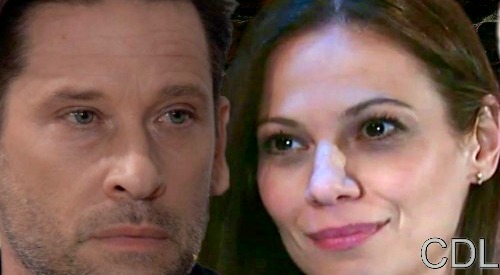 General Hospital (GH) spoilers tease that Franco Baldwin (Roger Howarth) will find himself in a puzzling situation. Based on all the clues GH is offering, it certainly looks like Franco will end up with Drew Cain’s (Billy Miller) memories. Let’s run down the evidence just to make sure you’re convinced.

Sibley Gamble told Franco he wouldn’t feel like himself soon. Chelsea Lambas, who happened to be Ava Jerome’s (Maura West) second opinion, warned Franco not to take that drive. Now that the memory flash drive has become the hottest topic in town again, we have to believe that’s the drive Franco will take.

It looks like Franco will wake up with Drew’s memories, which will change his life in a big way. Franco’s own may be buried deep, deep down under surface, but it seems he’ll feel like Drew for now. That means he’ll feel a connection with Kim Nero (Tamara Braun), not his lovely wife.

General Hospital was probably setting things up in a recent episode where Franco bonded with Kim a bit. She asked him to keep being a friend to Drew and offered encouragement regarding Cameron Webber (William Lipton). They were some nice scenes and a bit of a chem test. Whether or not Kim and Franco have chemistry is up for debate, but GH may play around with this pairing.

Kim will continue to mull over the idea of leaving town, but all this Franco drama should give her pause. She may feel the need to stick around and see what Franco remembers as Drew. Will Kim grow closer to Franco in the process?

If Kim falls for Franco, this could certainly be a setup for heartbreak and an eventual departure. Liz isn’t going to let Franco go without a fight, and it’s doubtful GH will break up “Friz” permanently – especially for “Frim,” “Kranco” or whatever you want to call them! This could be they’re way of opening the exit door for Kim.

Regardless, Franco’s got an interesting battle ahead of him. General Hospital spoilers say Liz will have to hang in there and hope that Franco’s true self comes back to her. He undoubtedly will with the power of love! We’ll give you updates as other GH news comes in. Stay tuned to the ABC soap and don’t forget to check CDL often for the latest General Hospital spoilers, updates and news.