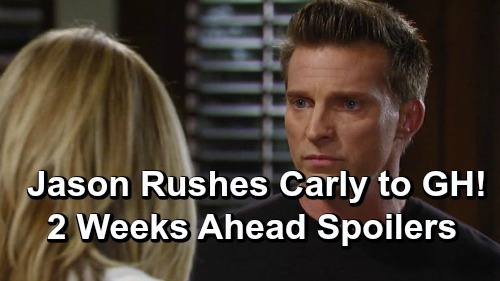 General Hospital (GH) spoilers tease that Jason Morgan (Steve Burton) will be in hero mode once again. GH fans know Jason’s always eager to step up when the need arises. That’s especially true when it comes to his family and friends. If someone close to him is in distress, Jason does whatever it takes to make sure the problem’s solved.

Unfortunately, another big problem will indeed come up and it involves Carly Corinthos (Laura Wright). Two weeks ahead, during the week of May 13-17, Jason will leap into action over Carly’s crisis. He’ll rush Carly to GH, so it sounds like some baby pains could be on the way.

General Hospital spoilers say Carly and Jason will also clash over something. Perhaps Carly will brush off the minor discomfort and suggest there’s no need to be alarmed. As the pain gets worse, Jason might put his foot down and insist Carly’s going to get checked out whether she likes it or not.

Of course, part of Carly might be worried about what the doctors will find. She may try to tell herself it’s nothing to avoid the examination and potential bad news. Carly went through quite an ordeal after Ryan Chamberlain (Jon Lindstrom) crammed her in a car trunk and tossed her down a ravine. Her baby was just fine during that hospital stint, so it’d be repetitive if the kid was fine during the next one.

In other words, GH can’t just keep showing hospital visits where nothing really happens. Disaster has to strike eventually. General Hospital spoilers say Jason will be tied up with Carly’s drama, which could leave Sam McCall (Kelly Monaco) vulnerable. As she sinks further and further into Shiloh Archer’s (Coby Ryan McLaughlin) web, the danger could spiral out of control.

Sam and Carly are the two people Jason will always help first, but he can’t be in two places at once. Will poor timing spark some chaos soon enough? General Hospital spoilers state that Jason will ultimately land in peril as well, so coming late to Shiloh’s party could be a terrible idea!

Things could definitely take a wrong turn at Dawn of Day over the next few weeks, so stay tuned. We’ll give you updates as other GH details emerge. Stick with the ABC soap and don’t forget to check CDL often for the latest General Hospital spoilers, updates and news.