General Hospital Spoilers: Oscar’s Not Done Yet, Reaches Out from Beyond the Grave – Memorial Service Surprises Ahead 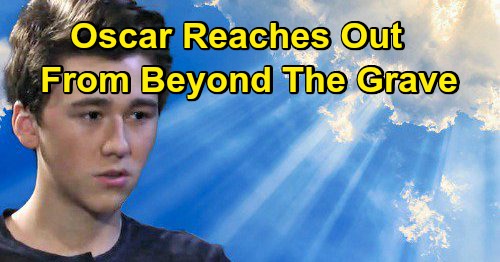 General Hospital (GH) spoilers tease that we haven’t seen the last of Oscar Nero (Garren Stitt). He just got an emotional sendoff on the ABC soap, which ended with his tragic death. However, Oscar will find a way to speak to his loved ones from beyond the grave. We can’t forget he made a special video for Josslyn Jacks (Eden McCoy), and it looks like others will be mentioned in that video, too.

There are plenty of new Oscar-related General Hospital spoilers for May 13. It seems that’ll be when his memorial service is held. GH fans can expect Cameron Webber (William Lipton) to step up in a big way. That may include showing the video at the appropriate time as well as comforting Joss when she needs him most.

Kim will have a rough time as everyone tries to say goodbye, but Oscar will hope to ease their pain. He’ll have a full day lined up, so it sounds like Oscar has some activities in store. Oscar may have left behind some instructions to help his friends and family members deal with their grief. He could send them on a bit of a scavenger hunt or perhaps popular spots that he used to love.

Whatever the case, Oscar will want this to be a time of celebration – at least as much as it can be. His loved ones are still going to be heartbroken as his funeral gets underway, but Oscar can hopefully provide some peace in the midst of it all.

Of course, grief tends to come in many forms and one of those forms is anger. There’ll definitely be some of heated moments as disagreements erupt. Sonny Corinthos (Maurice Benard) and Ned Quartermaine (Wally Kurth) will clash, so perhaps Sonny will worry about how something will affect Josslyn. Then again, it could involve Jason Morgan’s (Steve Burton) role in carrying out Oscar’s wishes.

Regardless, one of Oscar’s dying requests was for Jason and Drew Cain (Billy Miller) to try acting like brothers. It looks like they’ll make an effort in this special episode, which will serve as a second sendoff and a fitting farewell. Ryan Paevey still made a couple appearances as Nathan West after his death and funeral, so maybe we’ll see Oscar taking in the scene from afar.