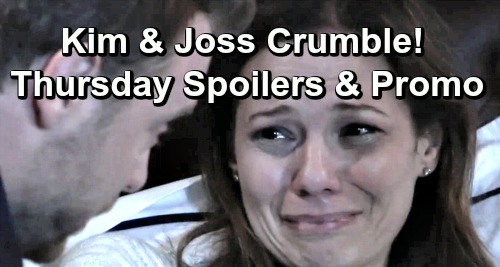 General Hospital (GH) spoilers for Thursday, May 2, tease that Franco Baldwin (Roger Howarth) will push Cameron Webber (William Lipton) to hear him out. If there’s one thing these two can connect on, it’s Oscar Nero’s (Garren Stitt) death. Now that Oscar’s gone, it’ll help Franco and Cam move past their recent drama. Life’s too short to let conflict get in the way.

Franco certainly didn’t want to see Drew Cain’s (Billy Miller) son die so soon. He’ll hate that Cameron is hurting as well, so this stepdad will want to make peace. Cameron will take Franco up on the offer and perhaps get some support on Thursday. Dealing with Oscar’s demise will be difficult for all Oscar’s loved ones, including Josslyn Jacks (Eden McCoy).

An emotional Joss will call someone with a desperate plea. She’ll beg the person on the other end to come see her, so she might be talking to Jasper “Jax” Jacks (Ingo Rademacher). General Hospital spoilers say Jax will make it back to Port Charles next week, so the timing lines up.

In the meantime, Dr. Kim Nero (Tamara Braun) will completely crumble. Drew will do his best to help Kim be strong and let Oscar go, but it won’t be easy. Over with Harrison Chase (Josh Swickard), he’ll hope to pry some info out of Michael Corinthos (Chad Duell). Chase will be convinced that Michael’s holding out on him, so he’ll try every trick in the book to make him talk.

When Michael continues to stonewall, Chase will suggest that Kristina Corinthos-Davis (Lexi Ainsworth) could still be at risk. He’ll note that if Michael’s family doesn’t have Kristina stashed away, she could be in danger. Michael will look pretty nonchalant since he knows Kristina’s safe and sound. The story is that Kristina left town on her own to clear her head, so Michael may stick with that.

Other GH spoilers say Sam McCall (Kelly Monaco) will meet up with Jason Morgan (Steve Burton). She’ll tell Jason that Shiloh Archer (Coby Ryan McLaughlin) has a file on her – complete with a photo she didn’t know was taken. Shiloh recorded Sam during that weird blindfold exercise and watched the hidden camera footage later, so the guy’s a real creep.

At the elementary school, Willow Tait (Katelyn MacMullen) will get another troubling visit from Shiloh. He’ll insist that he spoke to her mother, Harmony Miller (Inga Cadranel). Shiloh will add that they talk about everything, so Willow may fear Harmony spilled the pregnancy beans after all. Harmony claims she didn’t and Willow told her she miscarried anyway, but there’s a lot at stake.

Back with Sam, she’ll find herself facing a distraction. Will she end up worrying about Drew and how he’s holding up? Finally, Carly Corinthos (Laura Wright) will have a chat with Elizabeth Baldwin (Rebecca Herbst). They’ll share a nice moment as they come together over their grieving teens.