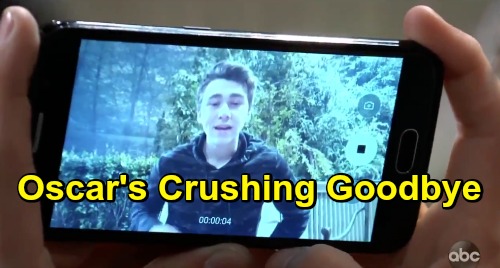 General Hospital (GH) spoilers tease that Oscar Nero’s (Garren Stitt) condition will weaken rapidly. He doesn’t have much longer to say everything he wants to say to his loved ones – especially Josslyn Jacks (Eden McCoy). There are undoubtedly some things Oscar would rather avoid saying to her face anyway. The idea of looking in Josslyn’s heartbroken, teary eyes must seem daunting.

Oscar seems to think it’d be easier to bid Joss farewell through a video. He just roped Cameron Webber (William Lipton) into helping him out with this little goodbye project. Of course, Oscar probably wants to leave Joss with something to remember him by, too. If Josslyn ever wants to see him or hear his voice, she can replay this clip and keep Oscar in her heart.

As for the contents of GH’s heartbreaking video message, that’s pretty easy to figure out. Oscar will probably say what any other dying teen would say to his girlfriend. There may be a few parts he makes personal, but the overall idea is to help Josslyn as she deals with this loss.

Oscar might urge Joss to be the same strong girl he fell in love with. He’ll most likely praise all his favorite qualities about her and assure her of his love. Oscar may tell Josslyn that it’s OK to miss him and grieve, but he won’t want her to stay stuck on him forever. Joss still has a long life ahead of her if all goes well, so Oscar will encourage her to live it to the fullest.

General Hospital spoilers say Oscar will do his best to cover everything that needs to be covered. He won’t want Josslyn feeling lost and alone after he’s gone. Oscar may remind Joss that she’s got a huge support system waiting, so she should take advantage of it. Her friends and family members can offer as many hugs and kind words as she needs.

Oscar will already be gone by the time Joss watches this video, so she should appreciate one last message from beyond the grave. General Hospital spoilers state that the aftermath of Oscar’s death will be brutal, but Joss will hang in there with help from Cameron, Carly Corinthos (Laura Wright), Jasper “Jax” Jacks (Ingo Rademacher) and more.

It sounds like Oscar’s final message will bring some deeply emotional moments, so stay tuned. We’ll give you updates as other GH news comes in. Stick with the ABC soap and don’t forget to check CDL often for the latest General Hospital spoilers, updates and news.