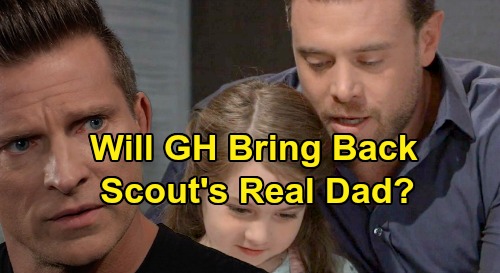 General Hospital (GH) spoilers tease that Jason Morgan (Steve Burton) will try to be the best father he can be. He recently shared heartbreaking news with Danny Morgan (Porter Fasullo), who was clearly upset over Sam McCall’s (Kelly Monaco) predicament. Anna Devane (Finola Hughes) advised Jason to be honest with the kids – at least as honest as possible considering their ages and how much they could understand.

Scout Cain (Ella Ramacieri) still doesn’t know about Sam’s two-year prison sentence and will undoubtedly be given a different version of the story than her brother. Danny’s quite mature for his age and was able to wrap his head around Jason’s explanation. Even so, it was tough to see the pain in Danny’s eyes. He’s rattled over this extended separation from his mom and will need his dad more than ever.

Of course, things may be especially hard for Scout since her true dad was presumed dead in a plane crash. Carly Corinthos (Laura Wright) pointed out that Drew Cain (Billy Miller) is gone and suggested that Jason is Scout’s father now. She noted that Scout won’t really remember Drew, so Jason will have to step up for her.

On the one hand, it feels like General Hospital is trying to erase Drew from Scout’s life and GH history. He is Scout’s biological father and there’s no changing that. The show was arguably somewhat disrespectful of Drew’s memory in the dialogue and Carly’s overall sentiment.

On the other hand, Carly’s right that Jason is all Scout’s got now. It is what it is. Someone will have to be there for Scout while Sam’s locked up and in the difficult years ahead. Since Jason will hopefully be Scout’s stepdad one day, it makes sense for him to take the lead. Drew would surely want a fill-in father for his daughter.

However, this could be a golden opportunity if GH brings Billy Miller back one day or they choose to recast the character. Jason will bond with Scout as if she were his own child. Scout will also form a connection with Jason. It could reignite the twin feud if Drew makes a comeback and complicate things if there’s ever a reunion between Drew and Sam.

Do you think GH will bring back Scout’s bio dad, Drew Cain? Are you glad Jason will step up in Drew’s absence for now? General Hospital spoilers say Jason’s got a hard road ahead while Sam’s behind bars! We’ll give you updates as other details emerge. Stay tuned to the ABC soap and don’t forget to check CDL often for the latest General Hospital spoilers, updates and news.