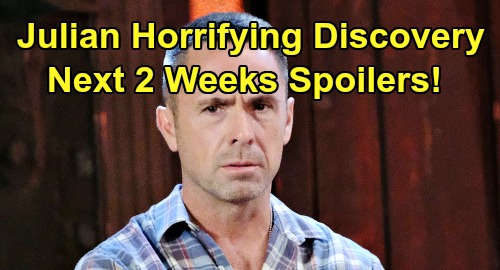 General Hospital (GH) spoilers for next two weeks tease that some shockers and shakeups are brewing. During the week of November 25-29, GH fans will get updates on Alexis Davis (Nancy Lee Grahn) and her poisoning drama. She has no idea who would’ve been trying to harm her, but Neil Byrne (Joe Flanigan) will think he’s got a pretty good idea.

Neil will start putting it all together thanks to Julian Jerome’s (William deVry) clues about dead rats and spotting Alexis’ personal trainer in the alley. He’ll tell Alexis that Kendra Lennon (Michelle Argyris) may be the one who poisoned her. Alexis will doubt it, but Neil will convince her it’s at least a possibility to consider.

As a result, they’ll test a pill given to Alexis by Kendra. Neil will feel confident that pill will prove his theory, but he’ll be wrong. It’ll be harmless gingko biloba, so Neil will be left puzzled once again. However, Neil’s initial instincts will haunt Alexis. She’ll feel like there may be more to the story here, so she’ll hope to find out if she’s got some connection to Kendra she doesn’t know about.

GH viewers know Kendra wants to avenge Kiefer Bauer’s (Christian Alexander’s) death. She tried and failed with the poisoned supplement, so what will her next move be? General Hospital spoilers say Alexis’ digging will put her on a collision course with another storyline – perhaps quite literally! GH buzz has it Kendra will mow down Alexis with her car, which could potentially cause a crash involving Brad Cooper (Parry Shen).

We’ll talk more about that in a moment, but we want to address Hayden Barnes’ (Rebecca Budig) looming departure first. Her abduction will thankfully go wrong down on the pier, but it’ll also let her know Valentin Cassadine (James Patrick Stuart) means business. Nikolas Cassadine (Marcus Coloma) will contend that Hayden needs to flee Port Charles and go into hiding – at least if she wants to survive!

Hayden will make the crushing decision to leave Violet with Hamilton Finn (Michael Easton), so big changes are brewing in in all their lives. That goes for Anna Devane (Finola Hughes), too! During the week of December 2-6, there’ll be fallout from Valentin’s dangerous actions. He’ll have a heated confrontation with Jasper “Jax” Jacks (Ingo Rademacher), so expect some tense scenes.

Over with Jason Morgan (Steve Burton), he’ll do something that catches Ned Quartermaine (Wally Kurth) off guard. There are no details just yet, but it sounds like Ned will have to wrap his head around Jason’s latest move. Next, Peter August (Wes Ramsey) will face some suspicions. Anna will pick up on Peter’s odd behavior and immediately wonder what’s got him so troubled.

Other General Hospital spoilers say Alexis’ discovery will lead to a shocker, which could lead to one for Julian, too. Will he find Alexis after she learns the truth and get mowed down by Kendra? That could bring some powerful “Julexis” moments. Julian definitely make some sort of horrifying find soon enough.

As for Lucas Jones (Ryan Carnes), he’ll be in a position where he has to beg Brad. Will he plead with his husband to pull through? That’s an option if Brad is indeed involved in this expected accident.