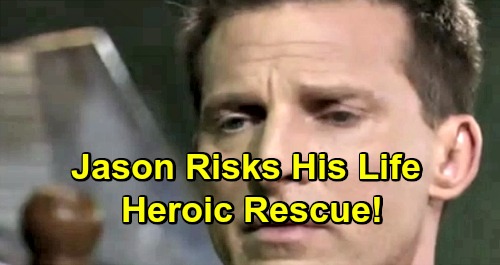 General Hospital (GH) spoilers tease that Jason Morgan (Steve Burton) will do what he does best – take action and become a hero! GH fans know Jason never runs away from danger. He’s always willing to step up and help anyone in need, especially if it involves somebody he cares about.

It looks like Jason will once again come to a loved one’s rescue. General Hospital spoilers say peril will hit Port Charles on January 23. Surprisingly, it seems Ryan Chamberlain (Jon Lindstrom) may not be to blame this time. Ryan may take a breather while the Corinthos clan faces a different kind of drama.

There’s no confirmation on this yet, but let’s take a look at some surrounding General Hospital spoilers for hints. On January 24, Mike Corbin’s (Max Gail) condition will decline dramatically. Sonny Corinthos (Maurice Benard) will be a nervous wreck while he awaits news and Carly Corinthos (Laura Wright) will be filled with sorrow. It sounds like Mike could be the one Jason helps the day before.

Perhaps Mike will have his worst episode yet and put himself in harm’s way. Even Yvonne Godfrey (Janet Hubert) could land in big trouble. That’d certainly add to the conflict between the Corinthos family and Marcus Godfrey (Nigel Gibbs). He’s already been hesitant to let Mike and Yvonne connect, but he’s softened a bit lately.

Another more dangerous incident could convince Marcus that he was right to worry. It could also make Sonny and Carly see that something has to be done. Mike undoubtedly needs full-time care, so they may officially put him in Turning Woods and accept that things are changing. This is bound to be a tough blow for all of Mike’s loved ones, but it’ll be especially difficult for Sonny.

As for Jason, he may be the one who finds Mike and saves the day. General Hospital spoilers say Jason will put his life on the line, so he may help Mike out of a terrible jam and prevent a disaster. Mike often gets other people in over their heads when he has these episodes. It’s lucky PC has a guy like Jason around to pitch in!