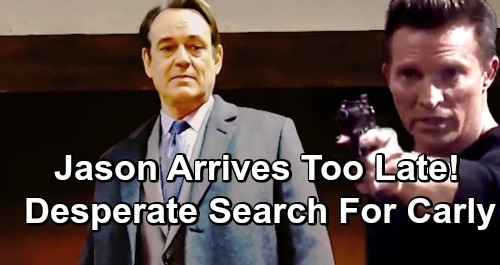 General Hospital (GH) spoilers tease that by the time Jason Morgan (Steve Burton) reaches the alley where Ryan Chamberlain (Jon Lindstrom) kidnapped Carly Corinthos (Laura Wright) and stuffed her in his car trunk, he’ll be too late! Ryan will have already left!

Since knowing Carly, Jason will assume she’s gone looking for her old neighbor patient Wilson – whose name Ryan changed from “Todd Wilson” to “Wilson Ritter” so they wouldn’t connect it to him – he will head for Ferncliff. It’s possible that this will happen the same day the real Kevin makes it out of the tunnel under Ferncliff and Jason encounters him, so he will know it’s Ryan, not Kevin, who might have Carly.

If Jason knows anything about Ryan Chamberlain and his history, that will put even more urgency on his search and rescue mission!

Since Ryan is in a big hurry to swoop up Ava Jerome (Maura West) and go on the lam, he will probably be uncharacteristically non-detail oriented as he puts Carly in the trunk. Carly had witnessed him playing around with his driver’s license collection and talking to himself about them and the current licenses, so she knows everything, possibly including that he’s Ryan, not Kevin!

Carly’s a big gal, almost as tall as Ryan himself, so there will probably have been quite a struggle when he put her in the trunk, possibly causing something to fall out of her purse…or, she may have been able to grab something like her cell phone or even her driver’s license if she could get to it, and leave it as a breadcrumb so whoever finds it might take a hint of who has her!

IF she was able to get her license and drop it in the struggle that will be a dead giveaway to Jason or the police as to who has her! Ryan may have tossed her cell phone since it could be tracked, but if the car is GPS enabled, there’s that! He may not be so tech-savvy to realize it can be tracked too; even if it’s not turned on!

Exciting drama lies ahead as Jason looks for Carly and the police look for Ryan; stay tuned to GH and keep checking CDL for General Hospital spoilers frequently to see all the latest news and developments ahead!