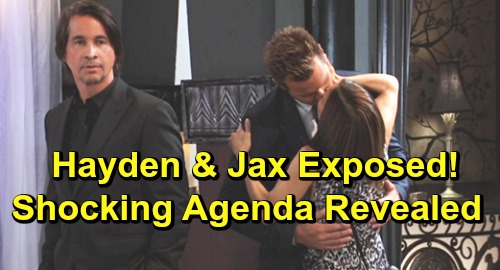 General Hospital (GH) spoilers reveal that Jasper “Jax” Jacks (Ingo Rademacher) is full of surprises. The longer Jax stays in Port Charles, the shadier his activities seem to be! It’s clearly no coincidence that Jax went after Crimson. He’s interested in Nina Reeves (Cynthia Watros), but that may be more about playing her than it is about attraction – at least at this point.

Thanks to Curtis Ashford’s (Donnell Turner) snooping, we know Jax has a file on Valentin Cassadine (James Patrick Stuart) as well as one on Cassandra Pierce (Jessica Tuck). Now Hayden Barnes (Rebecca Budig) has just revealed her own connection to Jax.

According to Hayden, they met in Rome a few months ago and realized they enjoyed each other’s company. Hayden also hinted at a project they’re working on together, so what’s this sneaky alliance up to? For starters, there seems to be a friends with benefits situation going on. Hayden planted a kiss on Jax, but the whole vibe they gave off was less than intense.

There was a spark, but it didn’t feel like a full-blown romance. Hayden’s comments didn’t portray it like that either. Of course, this is something GH could develop if the pairing proves popular. General Hospital could fan the flames of that spark and make this a real love story.

For now, it appears to be more of a business arrangement with potential sex on the side. Hayden mentioned that Jax hadn’t told her whether he was accepting her proposal. He suggested he was considering it, so there’s another interesting mystery to unravel. It’s possible that’s a marriage proposal for some reason that’ll be explained later, but it sounded like a very different kind of pitch.

General Hospital spoilers say Hayden’s got her own agenda just like Jax does. Their plans obviously line up a bit or else they wouldn’t have formed this partnership. Where is Hayden’s kid with Hamilton Finn (Michael Easton) and how does he or she fit into all this? Is Hayden taking steps to protect this child through her proposal – whether it be from Finn or just financially?

Hayden may have been offended since Finn didn’t accept her invitation to meet up in Italy. She barely even said “hi” to him at the reception. Hayden doesn’t seem eager to divulge the truth to Finn, so she may be counting on Jax to help her out with a problem instead. In exchange, Hayden may be quite useful on the Cassandra case.

Regardless, Ava Jerome’s (Maura West) psychic warned Finn would soon have more women than he could handle. Hayden’s back in town and Anna Devane (Finola Hughes) will return down the road. Cassandra seems poised to make a comeback since all these hints are dropping. It looks like Finn will indeed face drama thanks to all these ladies. That may even be a clue that his child’s a girl!

General Hospital spoilers say some exciting twists and turns will come through Jax’s partnership with Hayden. How do you feel about their chemistry? Should GH let real love bloom between Hayden and Jax? We’ll give you updates as other GH news comes in. Stay tuned to the ABC soap and don’t forget to check CDL often for the latest General Hospital spoilers, updates and news.