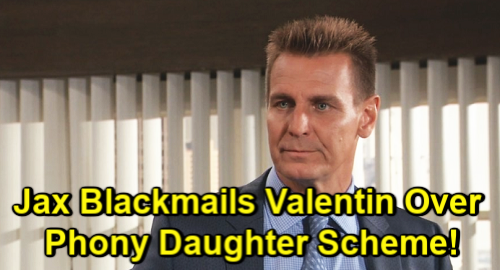 Although Curtis will be wary of working for Valentin again, he’ll ultimately go along with the idea. Curtis could really use the extra cash since Jordan Ashford’s (Briana Nicole Henry) medical bills have piled up.

Valentin would pay just about anything to get Jax out of the picture. He pretty much said so when he offered to buy Jax’s half of the company. However, Jax turned Valentin down and that means it’s time for drastic action. Valentin doesn’t trust Jax, so he’ll undoubtedly hope for some dirt he can use against him. If there’s some dark secret to be found, Curtis can surely uncover it.

Once Curtis accepts that this is the price of taking care of his wife, he’ll commit to the task at hand. General Hospital spoilers say Curtis will do some digging, which should yield some surprising results. Jax may indeed have a few unknown skeletons in his closet. There could at least be something that would change Nina Reeves’ (Cynthia Watros) perception of him.

Valentin needs to drive a wedge between Nina and Jax, so he’ll likely count on Curtis to make it happen. With the right information, conflict may be inevitable. Of course, Valentin may live to regret pushing Jax so hard. GH fans know Jax has his limits. After Valentin causes drama, Jax may return the favor. He might decide Valentin must have some secrets just waiting to be discovered, too.

Since Valentin is deceiving Nina with a fake daughter, that’s obviously the biggie here. Will Jax find out that Sasha Gilmore (Sofia Mattsson) is simply posing as Nina’s bio kid? If so, Jax could find himself feeling awfully conflicted. He’ll know Nina even better by the time this secret potentially heads his way.

Jax may determine that he needs to keep quiet – at least for a while. Guilt could drive him to blab later, but it’s possible Jax will want to spare Nina the heartbreak of losing her phony child. Plus, Jax can use this as leverage to make sure Valentin stays in line. He could make Valentin do anything he wants, so this would be the prime position for Nina.

However, Jax may have to come clean eventually if he hopes to be the winner of this love triangle. It’ll be easier to forgive someone who came clean rather than someone who didn’t. Valentin will face a tough battle if he ever hopes to win Nina back. His deception runs deep and will do serious damage in the end.

General Hospital spoilers say Valentin could get the ball rolling through Curtis’ mission. He doesn’t realize it yet, but he’s setting Nina up for the worst heartbreak of her life. We’ll give you updates as other GH news comes in. Stay tuned to the ABC soap and don’t forget to check CDL often for the latest General Hospital spoilers, updates and news.