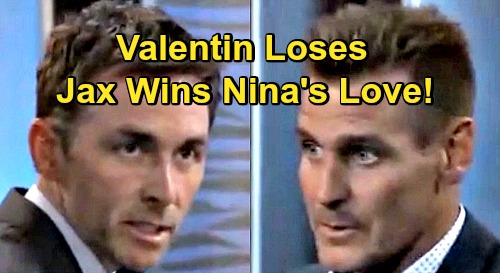 General Hospital (GH) spoilers reveal that Jasper “Jax” Jacks (Ingo Rademacher) never comes to Port Charles without an agenda. This time he may have upped the ante by setting his sights on Nina Reeves (Michelle Stafford. It looks like Jax is making some smooth moves, so things are headed down an interesting path.

Sonny hates Jax, and the feeling is mutual. Still, Jax claims to want to get along with Sonny for Josslyn’s sake. GH fans know Sonny loves Joss and would do anything for her, even have a deportation ban lifted so Jax could come back into the country.

Sonny wouldn’t want to upset Josslyn, especially not when she’s coping with grief. He’s the one who encouraged Josslyn to sing at the Nurses Ball. Joss loves Sonny as well, but General Hospital spoilers say Jax could make some waves. Sonny doesn’t want Jax to move next door, but he’ll live with it for Josslyn if he has to.

Jax was intrigued by Nina from the first time he saw her at the Nurses Ball. He could’ve easily seen Nina at other Nurses Balls that were televised in the past. Did Jax come to town wanting to meet Nina? Was this just an instant infatuation upon their first meeting instead?

Regardless, Jax might’ve bought Crimson to be in Nina’s orbit. Valentin Cassidine (James Patrick Stuart) loves Nina and is determined to remarry her. He’s gone to great lengths to win Nina back, including finding someone to act as her daughter. Valentin won’t take Jax’s presence lightly; he’ll fight for the woman he loves and keep his guard up when it comes to his new rival. On Monday’s new GH episode, June 3, Valentin will approach Sonny to form an anti-Jax plot!

Jax will stop at nothing to get a woman he wants. He’s been known to go as far as betting women that he could get them into bed. Will Jax offer to give Crimson to Nina if she’ll date him? Will Jax threaten to fire Nina to get his way? There are some intriguing possibilities now that Jax is running the show.

General Hospital spoilers say they may be setting up a new love story here, so Jax will likely win Nina after Valentin’s lies are exposed. Jax might help Nina cope with the fake daughter revelation and the big reveal of her real one.

Valentin and Jax may have a fierce battle over Nina, but Valentin will inevitably lose her again because of his deception. That could leave Jax and Nina poised to be lovers as well as business partners! We’ll give you updates as other GH news comes in. Stay tuned to the ABC soap and don’t forget to check CDL often for the latest General Hospital spoilers, updates and news.