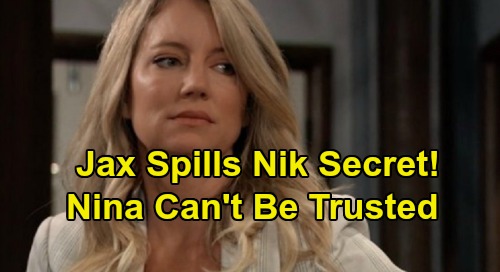 As Nina teared up, she wished Nathan was there in person so she could tell him what was really going on. Valentin interrupted and offered to listen instead, but Nina certainly can’t tell him the truth. If there was any doubt in your mind about Nina playing Valentin, her graveside comment hopefully eliminated it. What’s really going on is that she’s setting Valentin up!

General Hospital spoilers say Nina will continue to carry the burden of this secret alone – at least for a while. However, it looks like Jasper “Jax” Jacks (Ingo Rademacher) will battle some growing suspicions. During the week of November 18-22, Jax will corner Nina and demand some answers. He considers Nina a friend, so he may have an outburst from a place of concern.

Jax is incredibly stressed over his own secret, which involves Nikolas Cassadine’s (Marcus Coloma) survival. It could leave him with little patience as Nina tries to dodge his questions. She may keep defending her reunion, but Jax just won’t understand why Nina would fall right back under Valentin’s spell.

That’s when Nina will make a confession. General Hospital spoilers say Nina will divulge something to Jax, so she may come clean about reuniting with Valentin just to break his heart. She may admit she wants Valentin to suffer like she suffered – at least that’s how it was in the beginning.

There’s a chance Charlotte Cassadine’s (Scarlett Fernandez) kidnapping crisis could soften Nina a bit. Seeing how much Valentin cares for Charlotte should tug at her heartstrings. Nina loves Charlotte like she was her own little girl, so that’s something that could bring them closer and put Nina’s plan in jeopardy.

Of course, Nina may not confess that she’s starting to waver. That means Jax’s plan could be in jeopardy, too. It seems likely Nina will ultimately be brought in the Nikolas loop. If she changes her mind and decides she truly forgives Valentin, Nina could give him the heads-up on Nikolas and derail the takedown mission.

It’ll be interesting to see how this hot plot plays out! We’ll give you updates as other GH news comes in. Stay tuned to the ABC soap and don’t forget to check CDL often for the latest General Hospital spoilers, updates and news.