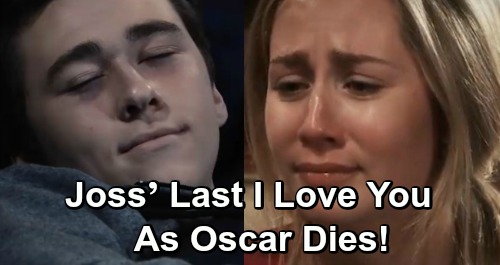 General Hospital (GH) spoilers tease that Josslyn Jacks (Eden McCoy) will share her final moments with Oscar Nero (Garren Stitt) this week. As Oscar starts to slip away, Joss will deliver one last “I love you.” She’ll want Oscar to know how much she cares about him before he goes.

Josslyn will desperately wish there was a way to save Oscar from this grim fate. She wants so many more days with her love, but she just won’t get them. General Hospital spoilers say Oscar will indeed die, so Joss will have to come to grips with that.

Thankfully, Josslyn’s family and friends support her through her journey of grief, but that doesn’t mean it’ll be easy. Carly Corinthos (Maurice Benard) will especially want to be there for her daughter, but she’ll struggle to help. Jasper “Jax” Jacks (Ingo Rademacher) may run into the same problem.

Joss has a great relationship with Michael Corinthos (Chad Duell), who has experienced plenty of loss. These siblings went through losing Morgan Corinthos (Bryan Craig), and Michael lost Jonah Corinthos as well. Of course, Brad Cooper (Parry Shen) has Jonah due to the baby swap with Nelle Benson (Chloe Lanier), but Michael’s in the dark. He still remembers drowning in grief over his son’s death.

Josslyn might be able to bond with Michael on this subject, but there’s a chance she’ll push him away, too. She may feel like it’s a different situation since Michael never got to know Jonah. Michael lost what might’ve been, but Joss is losing what already was. That doesn’t minimize what Michael or anyone in those circumstances goes through, but it could make it difficult for Joss to relate.

Even Morgan’s death was quite different from this one. Josslyn is being forced to let go of her first love, and she’s watching the life drain right out of him. She gave Oscar her heart, so it may break her just a bit more in this case.

GH spoilers state that Cameron Webber (William Lipton) may be Josslyn’s best shot at comfort. He’s Oscar’s friend, so he cares about Oscar just like Joss does. It’s obviously another kind of caring, but the point is they’re the same age and dealing with the loss of someone close to them. Cam and Joss can get through this together, but only if Josslyn will let him help her.

Joss will probably shut down at some point, but Cameron won’t let her do that forever. General Hospital spoilers say Cam may be the one to lift Josslyn’s spirits and help her find the path to moving on. We’ll give you updates as other GH news comes in. Stay tuned to the ABC soap and don’t forget to check CDL often for the latest General Hospital spoilers, updates and news.