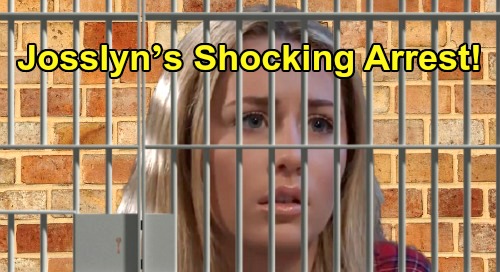 General Hospital (GH) spoilers tease that Josslyn Jacks (Eden McCoy) will try to get her mind off her troubles. She’ll head to her high school’s Halloween dance next week, October 28 to November 1, which will take place on The Haunted Star. Josslyn’s been down in the dumps ever since Oscar Nero Quartermaine (Garren Stitt) died, and the anniversary of Morgan Corinthos’ (Bryan Craig) hasn’t been helping.

However, Josslyn has at least found comfort in her friends. That trend will continue, but it could land Joss in hot water. GH fans know Josslyn has been spending a lot of time with Dev Cerci (Ashton Arbab) lately. She’s come to think of him as a pal – and from the looks of things, they could be on the verge of becoming more.

Even so, Josslyn has a special connection with Cameron Webber (William Lipton) as well. That connection will keep developing, but they’re about to run into a big problem. General Hospital spoilers say Joss and Cam will hang out at the dance together. That’s not a problem on its own, but what they choose to do might be!

On the GH episode of October 31, Cameron and Josslyn will get carried away. They’ll go a little too far with the spirits, which seems fitting for Halloween. There’s a chance that spoiler has a different meaning though. Could Josslyn and Cameron indulge in a few drinks? Whatever the case, they might wind up feeling invincible on this spooky holiday and create some drama for themselves.

General Hospital has done the whole “Josslyn is devastated” angle. It’s time to move on and perhaps let Josslyn act out. Many teens in her position would do just that. Of course, this could be an incredibly risky situation for Cameron, who’s on probation and can’t face any more legal issues. One wrong move could spell disaster for Cam.

If Dev tries to intervene, it could spell disaster for him, too. The last thing Dev needs is more questions from the PCPD. Dev could be deported or at the very least sent to boarding school by Sonny Corinthos (Maurice Benard). Sonny’s been clear about Dev keeping his hands clean and doing what he’s told. Any other red flags with the cops aren’t going to go over well at the Corinthos house.

That’s especially true if Dev tries to take the blame for Joss. Regardless, General Hospital spoilers say November 1 will bring major consequences for Josslyn. She’ll have to live with the nightmare she’s created, so this is sure to be a serious jam.

Josslyn could be arrested if she indeed gets caught drinking or doing some other ill-advised activity. Will Josslyn face a legal crisis thanks to this Halloween dance? Will she drag Cam and Dev down with her? We’ll give you updates as other GH news comes in. Stay tuned to the ABC soap and don’t forget to check CDL often for the latest General Hospital spoilers, updates and news.