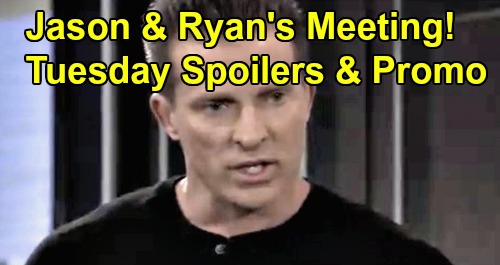 General Hospital (GH) spoilers for Tuesday, October 22, tease that Hamilton Finn (Michael Easton) will prepare to meet with Hayden Barnes (Rebecca Budig), but Robert Scorpio (Tristan Rogers) won’t approve of his plans. Thanks to Robert’s chat with Felicia Scorpio (Kristina Wagner), Robert will be quite suspicious of Hayden and Finn’s connection.

Robert will approach Finn and needle him a bit in Tuesday’s episode. He’ll wonder who says you can’t have your cake and eat it, too. Of course, Finn will likely insist he’s still committed to Anna Devane (Finola Hughes), but it’s clear that their relationship is on shaky ground. The longer Anna stays away, the more complicated things will become for “Fanna.”

GH spoilers say things will get more complicated on Hayden’s end as well. Curtis Ashford (Donnell Turner) will drop some hints during his next chat with Hayden. He’ll leave her feeling like Curtis knows something she doesn’t. Curtis is in the loop on Finn’s kid suspicions, but will he tip Hayden off? Regardless, a shocking medical crisis will force Hayden to come clean to Finn later this week.

In the meantime, Scott Baldwin (Kin Shriner) and Elizabeth Webber (Rebecca Herbst) will discuss Franco Baldwin’s (Roger Howarth) hearing. Liz will admit she’s searching for the one thing they missed. She may hope to focus on some crucial detail that could give them the upper hand.

It doesn’t look like they’ll truly have that detail until Julian Jerome (William deVry) comes along. Within the next couple episodes, Julian will reveal some info about Kim Nero (Tamara Braun) that changes the game. Will that involve Kim drugging Drew Cain (Billy Miller) on The Haunted Star for baby-making purposes or something else? Regardless, Scott will receive a bombshell that’ll shake things up.

Other General Hospital spoilers say Martin Gray (Michael E. Knight) will present another part of his strategy. He’ll note that if they’re going to battle, “Drew” needs to be dressed for it. Franco will put on a military dress uniform to sell this idea that he’s Drew Cain. It’s a smart tactic that’s sure to make a bold statement in court.

However, it’s risky to interact with Ryan all! The last thing Jason needs to do is rile Ryan up and potentially cause a greater threat to Sam. He’ll have to handle this situation carefully if he indeed secures a meeting. Elsewhere, General Hospital spoilers say Ava Jerome (Maura West) will spark more concerns for Julian. She’ll insist “he’s” always watching, so she may argue that Ryan sent someone to do his dirty work.

There’s a good chance Nikolas Cassadine (Tyler Christopher) is spying instead, so keep watching for other clues. We’ll give you updates as other GH news comes in. Stay tuned to the ABC soap and don’t forget to check CDL often for the latest General Hospital spoilers, updates and news.