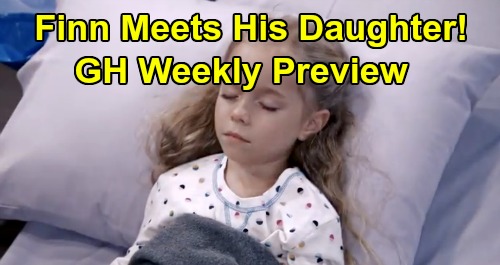 General Hospital (GH) spoilers preview teases that it will be a week of multiple bombshells as tragedy strikes, big decisions are made, and one Port Charles resident gets a very strange feeling. The new GH promo for the week of October 21st promises lot of action and some big revelations, so let’s get right into it!

First off, the promo shows a quick sequence of Sonny Corinthos (Maurice Benard) angrily slamming a door and, in another scene, Ava Jerome (Maura West) yelling out in surprise. As GH viewers know, Ava has been feeling like she’s being watched, but so far, she’s just sounded paranoid over the whole thing. She and everyone else have been tying it to her wariness about Ryan Chamberlain (Jon Lindstrom) – she feels like there are eyes on her and that Ryan is “watching.”

But it’s been made clear to GH spoilers tell us that someone really is lurking and watching Ava. There was someone hiding in the wings recently as she interacted with Laura Collins (Genie Francis) at The Metro Court. And upcoming Halloween spoilers indicate that Ava will be followed from the Halloween party at The Metro Court to her gallery, so clearly there’s someone really watching her.

Ava’s shown in the promo telling her brother Julian Jerome (William deVry) that “somebody’s watching me, I can feel it.” She’s also shown sensing someone outside her penthouse door, but when she goes to look, it seems that there’s no one there. GH buzz is that it could be Nikolas Cassadine (last played by Nick Stabile) who is watching Ava, but GH viewers will have to wait to see.

Next, the promo addresses the situation between Hamilton Finn (Michael Easton) and Hayden Barnes (Rebecca Budig). As GH viewers know, Finn now actively suspects that Hayden may have had their child and is hiding it from him. And according to the promo, he’ll find out that he’s absolutely right about that in a very scary way.

The promo shows a little girl who has been brought into the hospital and lying in a hospital bed sleeping. Finn and Hayden are shown standing outside the room, with Hayden telling Finn that the patient in that room is their daughter. But what’s wrong with their little girl? Could she have had some accident, or could she have s chronic condition or other disease? Time will tell, but it’s probably not a good situation if she was brought in through the ER.

Finally, the new GH weekly preview promo promises some big courtroom drama, as the judge in Franco Baldwin’s (Roger Howarth) competency case announces that she has reached a decision in the matter. That means that the hearing will conclude by week’s end, so we should be in for several days of heavy testimony and back-and-forth drama.

Interestingly, Jason Morgan (Steve Burton) is shown on hand for the hearing and he looks conflicted. He’ll no doubt be wanting to support Elizabeth Baldwin (Rebecca Herbst) emotionally, but given his feelings toward Franco, he may be hoping for a resolution in Franco’s favor – meaning that he’d like to see Franco keep the Drew persona permanently and never come back as Franco.

General Hospital spoilers say that Elizabeth will receive a crushing blow so it looks like we’ll get a decision in the matter that favors the current Drew version of Franco. We should know by week’s end whether Franco will be declared incompetent, paving the way for Elizabeth to force Andre Maddox’s (Anthony Washington) memory reversal procedure on him – but GH buzz says this won’t happen .