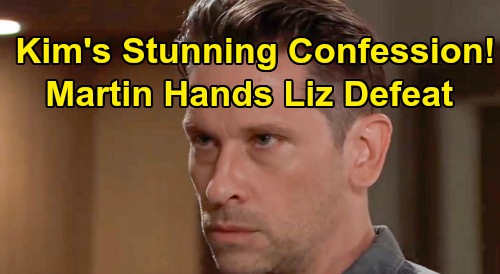 General Hospital (GH) spoilers tease Franco Baldwin’s (Roger Howarth) hearing is rapidly approaching, so both sides will be ready for a fierce fight. During the week of October 21-25, Scott Baldwin (Kin Shriner) will fill Elizabeth Baldwin (Rebecca Herbst) in on all the final preparations. He’ll assure Liz that he’s going to do everything he can to pull off a win.

Of course, Scott will acknowledge that if he loses, Franco could be gone forever. That could mean “Friz’s” relationship would be over for good. Just in case that happens, there’s something Scott will want Liz to know. He’ll reveal that he was planning on giving a special toast at Liz and Franco’s wedding reception, but that plan didn’t pan out.

Scott will think now’s the perfect time to deliver his speech to Liz. He’ll just want her to know how grateful he is for the love and happiness she’s given Franco so far. Once Scott makes his sweet spiel, Liz will be overcome with emotion. She’ll hope they can all come together as a family again and finally get Franco back.

Scott will promise Liz that his speech doesn’t mean he’s throwing in the towel. It’ll be more like a kind gesture to cheer her up before the hearing. It’ll be meant to give them all more motivation to win. In the courtroom, GH spoilers say Scott will greet Martin Gray (Michael E. Knight). There’ll be some tense moments as they get ready to spar over Franco’s future.

Martin will do everything he can to make Franco seem like the real Drew Cain (Billy Miller). Franco will have Drew’s medals there just like Martin talked about. He’ll also be in his dress military uniform, so Martin will really be working this whole angle.

Once the hearing’s underway, Martin will make a strong case for why Franco is now Drew and shouldn’t be forced to change back. His argument will remain that Franco’s identity is tied to his mind. His body doesn’t match, but Martin won’t think that’s a good enough reason to force Franco into a procedure – especially one that could put him in a vegetative state.

However, Julian Jerome (William deVry) will pass along some crucial info. It’ll really change the game for Scott as he prepares to grill Kim Nero (Tamara Braun) in court. General Hospital spoilers say Kim will be thrown by Scott’s line of questioning. She’ll have to make a stunning admission, which may or may not have something to do with drugging Drew and trying to force him to sleep with her.

Whatever Kim confesses will leave Scott confident, but it’ll be in the judge’s hands sooner or later. Alas, there’s a good chance Scott will lose the battle. General Hospital spoilers point to a crushing defeat for Liz, but there’s still hope. We know Franco will ultimately be Franco again, so perhaps Scott and Liz’s argument will touch his heart.

Kim’s confession could affect him as well, so it’ll be interesting to see how Franco handles all this. General Hospital fans won’t want to miss the hot drama ahead! We’ll give you updates as other GH news comes in. Stay tuned to the ABC soap and don’t forget to check CDL often for the latest General Hospital spoilers, updates and news.