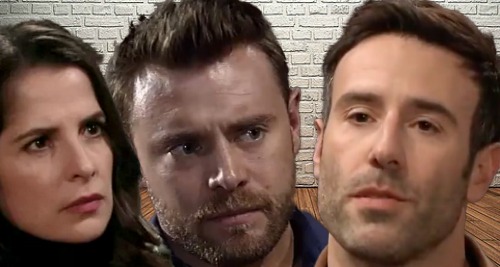 General Hospital (GH) spoilers tease that Sam McCall’s (Kelly Monaco) plan will make some serious waves. She knows it’s best if she plays the role of vulnerable single. Sam wants Shiloh Archer (Coby Ryan McLaughlin) to believe she’s distraught over a breakup with Jason Morgan (Steve Burton). That way Shiloh will think he can sell Sam a new path at Dawn of Day.

Of course, Sam will keep her relationship with Jason going strong behind closed doors. She just got him back, so she’s not willing to give him up for real. Nevertheless, this split has to look legit.

Sam and Jason can’t let start letting people in the loop on their plot or the truth could get back to Shiloh…or Kristina Corinthos-Davis (Lexi Ainsworth). She would blab about their scheme the first chance she got.

With that in mind, it seems Jason and Sam will leave even their closest loved ones in the dark. They’ll pretend to be heartbroken, so expect some raised eyebrows and even full-blown meltdowns.

Many GH fans are passionate about their support for “JaSam.” Carly Corinthos (Laura Wright) is no different. She was overjoyed when she heard about the reunion, so she’s in for a shock.

General Hospital spoilers say Carly will be appalled and disappointed over the breakup. She’ll also rip into Sam on February 11, so she may spot a cozy moment with Shiloh. Carly may spiral out of control sooner or later. We all know how she can be, so Jason and Sam may have to tell her the truth to shut her up!

However, there’s someone else who may battle confusion over Jason and Sam’s breakup. Drew Cain (Billy Miller) might be left out of the secret, too. It’s not a good idea since Drew’s also connected to Shiloh, but Sam and Jason may not want to burden this troubled dad with anything else. Just watching Oscar Nero (Garren Stitt) slowly die is enough to deal with.

Still, Drew will make time to corner Shiloh on February 11. That’s the same day Carly will blast Sam, so there could be a connection. Drew may be just as concerned about the growing bond between Sam and Shiloh.

She might break down and admit her scam to him eventually, but Drew would still have concerns. Shiloh is one tricky character, so Drew may worry that Sam’s getting in over her head.

General Hospital spoilers say danger is brewing for all parties involved, including Kristina. It sounds like Shiloh could take a truly villainous turn, so who will step up to save the day? Will it be Jason as usual or will it be Drew’s turn to intervene?