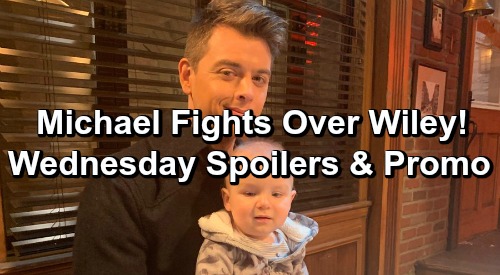 General Hospital (GH) spoilers for Wednesday, January 30, tease that Robert Scorpio (Tristan Rogers) won’t know what to believe. Based on his notes, both Dr. Kevin Collins (Jon Lindstrom) and Anna Devane (Finola Hughes) met with Dr. Cabot. Ryan Chamberlain is pretending to be his brother right now, so he doesn’t know all the details of his past. Anna is most likely in the dark in a different way.

When Robert confronts her on Wednesday, Anna will suggest she could take a lie detector test. She’ll most likely promise that to her knowledge, she never worked with or even interacted with Dr. Cabot. Robert may believe Anna by the end of their conversation, but he’ll still be puzzled. Why do his notes say Anna met with Dr. Cabot if she didn’t? Anna’s twin, Alex Devane Marick (Finola Hughes), may hold the answers!

Other General Hospital spoilers say Oscar Nero (Garren Stitt) will spend more time with Josslyn Jacks (Eden McCoy). He’s trying to savor as many moments as he can before he fades away. The topic of Oscar’s parents will come up during their next chat. He’ll admit that Dr. Kim Nero (Tamara Braun) has been hanging out with Drew Cain (Billy Miller) more lately.

Josslyn knows Oscar wanted his parents to reunite before all the tumor drama started. She should be pleased, especially since Drew and Kim will need each other more than ever after Oscar’s gone. For now, Drew will make his move. He’ll ask Kim to have dinner with him, so perhaps she’ll accept and begin opening her heart to Drew even more.

Michael Corinthos (Chad Duell) will also enjoy a day out with “Wiley” Cooper-Jones. He’ll take his godson to Charlie’s Pub and snap at Julian Jerome (William deVry) to keep his distance. Call us crazy, but wouldn’t it be better to take “Wiley” to literally any other restaurant in Port Charles? If Michael doesn’t want Julian getting too close to the baby, maybe he could try not dining in the pub Julian owns.

Meanwhile, Brad Cooper (Parry Shen) will sense that something’s bothering Lucas Jones (Ryan Carnes). He’ll push Lucas to open up while Julian faces off with Willow Tait (Katelyn MacMullen). GH spoilers state that Julian will remind Willow of the adoption agreement. He vowed not to be part of “Wiley’s” life, so he’ll insist he’s keeping his end of the bargain. Julian will wonder if Willow can say the same.

Willow was supposed to stay anonymous and let “Brucas” raise their son in peace. Julian will just hope Willow can stick with that plan despite her obvious motherly instincts. Later, Julian will offer Brad a stern warning. He’ll insist that Brad needs to steer clear of Willow or else this could end in disaster. That’s not the real Wiley, so letting Willow insert herself in this mess wouldn’t work out well for any of them.

At Ferncliff, General Hospital spoilers say Ryan will be enraged. He just got a shocking phone call about Kevin, so he’ll rush right over and get updates on the problem. It won’t be long until Ryan’s lashing out at the nurse and asking how she could let this happen.

If Kevin had escaped, there would be no need for Ryan to head to Ferncliff. He’d just hightail it out of town! Kevin’s loved ones also would’ve heard from him by now if he were a free man. Instead, it seems there’ll be some other emergency that involves Kevin. Whatever it is won’t please Ryan one bit!

General Hospital fans won’t want to miss all Wednesday’s excitement. We’ll give you updates as other GH news comes in. Stay tuned to the ABC soap and don’t forget to check CDL often for the latest General Hospital spoilers, updates and news.