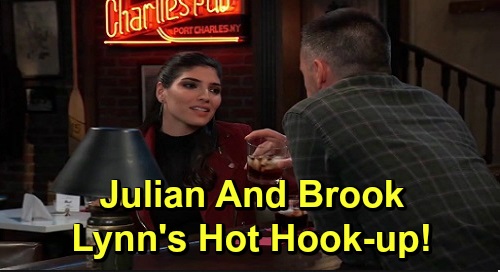 General Hospital (GH) spoilers tease that Julian Jerome (William deVry) could have a hot hookup in his future. It’s interesting that GH chose to reintroduce Brook Lynn Ashton (Amanda Setton) to the canvas with Julian scenes. She drank at Charlie’s Pub and put up a fight when Julian tried to kick her out.

Brook Lynn ended up suggesting that they flip the script and have her listen to the bartender’s problems for a change. She gave Julian some advice after he opened up a bit, so they established a curious connection. Some GH fans definitely saw some chemistry. Julian is obviously older than the ideal man for Brook Lynn, but age is just a number – especially if we’re talking about a fling and not a long-lasting relationship.

Brook Lynn will no doubt find herself back at Charlie’s Pub soon. That could lead to more bickering and bonding. Julian and Brook Lynn have the perfect dynamic to set up some steaminess. When you pair attraction with irritation, it always has the potential to explode into chemistry. This matchup could also create serious drama since you can bet Ned Quartermaine (Wally Kurth) wouldn’t approve!

We’re not saying GH will officially pair Julian and Brook Lynn. Again, she seems too young to make them a long-term viable couple. However, Julian doesn’t have a love interest now that Kim Nero (Tamara Braun) is gone.

There are rumblings that General Hospital may finally put Julian and Alexis Davis (Nancy Lee Grahn) on a path back to each other, but that’s obviously not going to happen for a while. Alexis is still interested in Neil Byrne (Joe Flanigan) right now and will be busy with story shockers over the next few weeks.

As for Brook Lynn, she seems like she’d enjoy something meaningless and fun. Brook Lynn could settle down with a real romance later, but why not have her indulge in some hot Julian lovin’ – at least for a night? That could be enough to make Ned unleash her fury if he finds out. It’d also be intriguing to see how much Brook Lynn and Julian would sizzle

Would you be on board with a Julian and Brook Lynn fling? Would you like to see a Ned and Julian war result? General Hospital spoilers say some great drama’s brewing in Port Charles, so don’t miss what’s in store. We’ll give you updates as other GH news comes in. Stay tuned to the ABC soap and don’t forget to check CDL often for the latest General Hospital spoilers, updates and news.