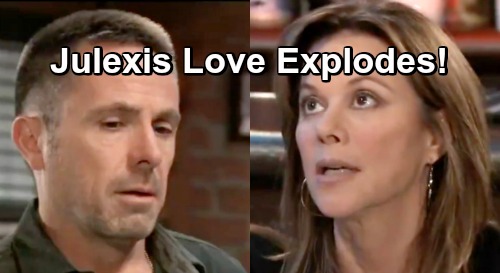 General Hospital (GH) spoilers tease that Alexis Davis (Nancy Lee Grahn) will get some news that leaves her rattled. After Julian Jerome (William deVry) breaks up with Kim Nero (Tamara Braun), Alexis will find herself feeling terrified. She won’t be able to wrap her head around her complicated feelings.

As long as Julian and Kim were together, Alexis could bottle up any lingering love. It undoubtedly made it easier when Julian was busy falling for another woman. Alexis could convince herself that things were over and they were both moving on.

Of course, Alexis hasn’t exactly been doing great in the romance department. She was on the verge of something with Dr. Hamilton Finn (Michael Easton), but his feelings for Anna Devane (Finola Hughes) got in the way. Finn and Alexis seem better off as friends anyway. There just wasn’t enough of a spark to justify a romantic relationship.

That’s especially true when chemistry still explodes every time Julian and Alexis on are screen together. It always feels like they’re just a step away from reconnecting. Julian’s made plenty of mistakes, but he’s worked hard to change. Alexis certainly admires the better path he’s chosen. Can she overcome the past and give Julian another chance?

Some GH viewers remain firmly against a “Julexis” reunion. Others are willing to overlook anything if it means having their favorite couple again. No matter which camp you fall in, it looks like a “Julexis” reunion could be in the works.

Nancy Lee Grahn recently sent out a tweet that gave Alexis and Julian fans hope. She posted a picture of Soap Opera Digest’s latest issue, which included “Julian and Alexis reunite?” on the cover. Grahn added a significant quote from Mary Poppins to back up the idea. She said, “2019. ‘Everything is possible, even the impossible.’ – Mary Poppins”

Grahn seems open to the possibility of Julian and Alexis getting back together. It’s a popular pairing that could give her much more material in the months ahead. General Hospital spoilers say Julian and Alexis will grow closer as they try to figure things out, so let’s hope they can get find the road to happiness!

Are you excited to see what the future holds for Alexis and Julian? We’ll give you updates as other General Hospital details emerge. Stay tuned to the ABC soap and don’t forget to check CDL often for the latest General Hospital spoilers, updates and news.