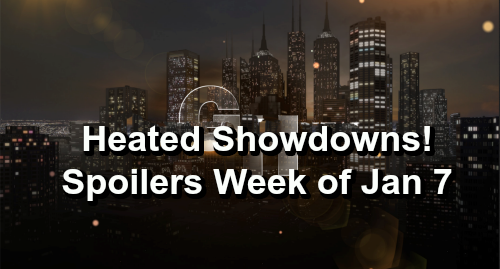 General Hospital (GH) spoilers for the week of January 7-11 tease that some heated conflict is coming up. First, let’s talk about Drew Cain (Billy Miller) and Julian Jerome’s (William deVry) showdown. Drew will call Julian out for hurting Kim Nero (Tamara Braun), so Julian will defend the breakup. They’ll have a fierce faceoff over the woman they both care for very much.

Meanwhile, Alexis Davis (Nancy Lee Grahn) will have a faceoff of her own. She’ll get into an intense argument with Kim over Julian’s cheating. He claimed he hooked up with someone after he spotted Kim and Drew locking lips. Kim assumes it was Alexis, so she’ll rip into her in the week ahead.

Of course, Alexis certainly hasn’t been in Julian’s bed recently. She’ll be upset that Julian let Kim think that, so this mess will get even messier. Later, Dr. Terry Randolph (Cassandra James) will have a meeting with Kim. They’ll discuss Oscar Nero’s (Garren Stitt) treatment and how it’s working out so far.

Other General Hospital spoilers say Franco Baldwin (Roger Howarth) will battle some anxiety. Elizabeth Webber (Rebecca Herbst) may face some as well, but good news is on the way. Perhaps Aiden Webber’s (Jason David) school situation will indeed improve for now. Unfortunately, this isn’t the end of poor Aiden’s drama. Any peace this family gets will only be temporary.

Elsewhere, Sam McCall (Kelly Monaco) will have Kristina Corinthos-Davis (Lexi Ainsworth) on her mind. She won’t like the creepy community house her sister’s mixed up in. Sam certainly won’t like Shiloh (Coby Ryan McLaughlin) aka “Hank.” Jason Morgan (Steve Burton) will keep digging for info about Shiloh and this apparent cult.

Drew will also find a way to come through for Sam and in return, she’ll come through for him, too. They’ll provide some good mutual assistance while Sonny Corinthos (Maurice Benard) seeks out Lulu Falconeri (Emme Rylan). He’ll probably want to see how she’s holding up without Dante Falconeri (Dominic Zamprogna) and see what she’s learned about Port Charles’ latest serial killer.

Over with Anna Devane (Finola Hughes) and Peter August (Wes Ramsey), they’ll come together for a special mission. GH spoilers say this mother and son will team up, so they could get a chance to do some bonding. As for Valentin Cassadine (James Patrick Stuart), his romantic plans will really blow Nina Reeves (Michelle Stafford). She won’t regret reuniting with Valentin – at least not yet!

General Hospital fans will also see a tight spot for Ryan Chamberlain (Jon Lindstrom). He’ll have to hide his trail, but he’ll keep calm and focus on the task at hand. We’ll give you updates as other GH details emerge. Stay tuned to the ABC soap and don’t forget to check CDL often for the latest General Hospital spoilers, updates and news.