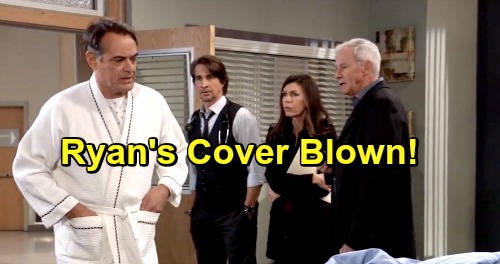 General Hospital (GH) spoilers tease that Robert Scorpio (Tristan Rogers) will be determined to get answers. “Dr. Kevin Collins” aka Ryan Chamberlain’s (Jon Lindstrom) claims didn’t match up with Robert’s findings. Robert will hope to find out why Ryan didn’t give him the true story, but he’ll already have some suspicions about that. He’ll make some shocking suggestions about Kevin’s secret life.

Robert will immediately grow even more suspicious. He’ll feel like “Kevin” must be off hiding his trail, but Anna will think the patient’s disappearing act is more innocent than that.

After Anna got her sight back, she was eager to visit GH’s solarium. Going blind was a very traumatic experience for Anna. The thought of never seeing anything again brought total terror. Anna felt the need to savor her vision when it returned, so she’ll assume that’s how “Kevin” is feeling. She’ll think “Kevin” must be hitting that solarium we mentioned or perhaps the rooftop.

Robert will maintain that “Kevin” could be up to no good, but Finn will argue that he’s just being paranoid. When Robert suggests it comes with the profession, Anna will concede that he’s got a point.

General Hospital spoilers say Robert will think he’s got it all worked out. He’ll argue that “Kevin” may have worked for the DVX himself, but Anna and Finn won’t buy that yet.

They just won’t see “Kevin” as some sort of deep cover spy, but Robert won’t back down. He’ll think it’s reasonable to assume there’s a very different side to the good doctor.

Robert is right about that, but not in the way that he thinks. GH fans know “Kevin” is actually Ryan at the moment. He won’t be off at the solarium or hiding DVX evidence. Ryan will be busy trying to kill Lulu Falconeri (Emme Rylan) again in her hospital room.

When Ryan finally returns to his own room at GH, he’ll face the inquisitive mob. Ryan will gripe that he’s tired and hope they’ll all go away. General Hospital spoilers say Robert, Anna and Finn will insist on sticking around.

They won’t be leaving without an explanation for “Kevin’s” deception, so Ryan will have to come up with one. Pretending to be his brother will suddenly get a lot more complicated!

General Hospital fans won’t want to miss all Ryan’s drama in the week ahead. We’ll give you updates as other GH news comes in. Stay tuned to the ABC soap and don’t forget to check CDL often for the latest General Hospital spoilers, updates and news.