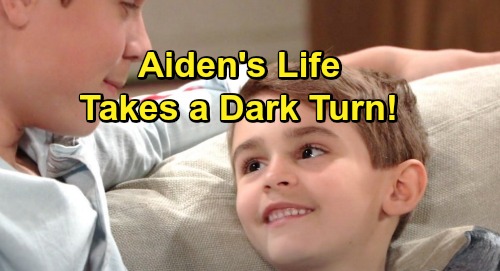 General Hospital (GH) spoilers tease that Aiden Webber’s (Jason David) bullying situation may get worse before it gets better. Aiden’s a quiet little guy and doesn’t open up about what the other kids are saying or doing to him, so it’s hard for his parents to know whether he’s still the victim of bullying at school.

The bullying by Charlotte Cassadine (Scarlett Fernandez) seems to have been nipped in the bud after Lulu Falconeri (Emme Rylan) and Valentin Cassadine (James Patrick Stuart) let Charlotte know that her behavior was unacceptable. And according to their teacher Willow Tait (Katelyn MacMullen), Charlotte’s bullying behavior has ceased.

But that doesn’t leave Aiden in the clear by any means. According to Jake Spencer (Hudson West), Aiden is widely considered to be “weird” by the other kids, so clearly there may be others besides Charlotte who have bullied him, or who are currently bullying him.

And GH has thrown a couple big clues as to what might be going on. It looks like Aiden may be being cyber bullied. On one occasion, a message popped up on Aiden’s computer screen calling him a loser, and on another occasion Cameron Webber (William Lipton) discovered a disparaging message directed to Aiden on Aiden’s tablet.

But Cameron didn’t say anything about the message to anyone. Of course, Cameron is just a teenager and probably doesn’t know how to handle the situation, but due to his and Aiden’s silence about what’s going on, Elizabeth Webber (Rebecca Herbst) and Franco Baldwin (Roger Howarth) don’t know about the messages Aiden’s getting.

And, sadly, that means that they can’t help him deal with the problem. It seems that Aiden’s bullying problem is still active and on-going, and it will probably get pretty bad before Elizabeth and Franco realize what’s going on.

Do you think that Aiden will ever speak up about what he’s going through and ask for help? Stay tuned to the ABC soap and don’t forget to check CDL often for the latest General Hospital spoilers, updates, and news.