General Hospital Spoilers: Franco and Liz Wonder If Aiden Is Gay, Brad Pitches In – Family Turns to Kevin For Answers 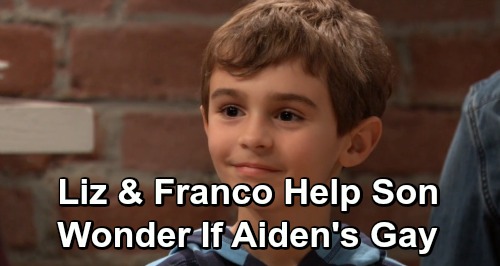 General Hospital (GH) spoilers tease that Franco Baldwin (Roger Howarth) will get back in the kitchen with Aiden Webber (Jason David). The kid really seems to thrive when he’s baking and having a good time. It’s a fun hobby for him and he knows far more than the average little boy. Franco will use a batch of cookies as a way to pry more info out of Aiden and understand him a bit better.

Aiden will indeed open up somewhat, so Franco have a better sense of what Aiden’s up against. Cameron Webber (William Lipton) and Jake Webber (Hudson West) may be able to help with that, too. Aiden was bullied by Charlotte Cassadine (Scarlett Fernandez), but she’s not the only one who thinks Aiden is weird. His whole class has pretty much turned against him, so Aiden tends to keep to himself.

Cameron pointed out that they can love and protect Aiden at home, but it’s tougher when he’s facing cruel kids at school. Of course, Cam also noticed the message on Aiden’s tablet. It involved some name-calling that’ll be important later. One of the kids targeting Aiden called him “Gayden.” Franco and Elizabeth Webber (Rebecca Herbst) will actually have a heart-to-heart chat about that soon.

Liz and Franco will wonder if Aiden might be gay. That’ll lead them down different paths as they search for answers. On January 31, Liz will turn to Brad Cooper (Parry Shen) for advice. She may want to know when Brad first knew he was gay and how it affected him growing up. Liz will just be desperate to give Aiden the love and support he needs.

Meanwhile, Franco will put aside his animosity over being dropped as a patient of “Dr. Kevin Collins.” On February 4, Franco will force a session to figure out how he should handle this. Let’s hope Ryan Chamberlain (Jon Lindstrom) doesn’t steer Franco wrong! It doesn’t look like the fake doc will do too much damage since Franco will take Aiden ice skating the next day.

General Hospital fans will no doubt have mixed feelings about this storyline. It’s great that Liz and Franco will want to accept Aiden just the way he is. They’ll be careful about how they handle Aiden’s tender heart, so it’s clear that there’s a lot of love in this family.

Nevertheless, we can’t help but notice what the show is apparently offering as telltale signs of Aiden’s sexual orientation. Aiden prefers drawing and princess pencils to roughhousing with the boys outside. He’s also a sensitive kid who enjoys things like baking and soon, ice skating.

It seems silly to say that because a third-grader likes making cookies instead of doing something more traditionally masculine – like playing football, for example – he must be gay.

Toxic masculinity has become a hot topic in the news lately, so GH could be entering risky territory here. Whether you’re gay, straight, bisexual or anything else, it’s perfectly fine to get in the kitchen and have fun or appreciate art.

That said, Liz and Franco will be there for Aiden no matter what. It’s nice that he’ll have a solid support system in place. When Aiden’s old enough to express the gender he’s attracted to, they’ll be behind him 100 percent. Franco and Liz will try to make sure Aiden feels comfortable opening up, which is certainly a good thing.