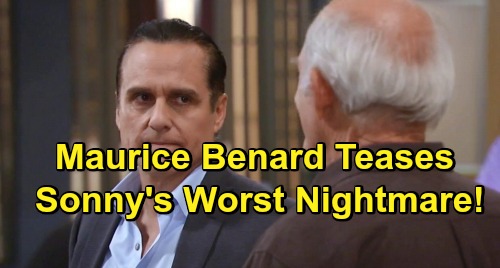 General Hospital (GH) spoilers tease that Sonny Corinthos (Maurice Benard) will move forward with his plan. He recently decided it was time for Mike Corbin (Max Gail) to move out of the house and into Turning Woods. It wasn’t an easy choice since Sonny only recently formed a real relationship with his father. He wishes he could’ve had more lucid months with Mike, but he’s just not going to get them.

Carly Corinthos (Laura Wright) will want to support Sonny every step of the way. She knows how hard this must be for him. It’ll certainly be hard on Carly, too. She has a sweet bond with Mike, so it’s truly tough to let go. By moving Mike to Turning Woods full-time, they’re accepting that they’re losing him to Alzheimer’s.

GH spoilers say Dr. Griffin Munro (Matt Cohen) will agree that this is the right call. Mike’s memory issues are rapidly getting worse. He usually thinks Josslyn Jacks (Eden McCoy) is some friend from his younger years named Mary. Mike also tends to think he has to get in touch with his parents or catch a bus somewhere. He’s disoriented and that leaves him fearful in the Corinthos home.

At Turning Woods, Mike can establish a nice routine and have professionals on stand-by. He’ll also have Yvonne Godfrey (Janet Hubert) around to give him comfort. Mike is crazy about Yvonne, so she’s a calming influence. That’s great since Mike’s been becoming violent lately. He punched Sonny not too long ago, so it’s clear that he needs more help than his son can give.

General Hospital spoilers say Sonny will have to have the conversation he’s dreading. He’ll let Mike know he’ll be living at Turning Woods from now on. Mike won’t really understand, but he’ll go along with whatever Sonny suggests. He’ll pack up some stuff to take to the center and prepare to leave.

Sonny will pull out a photo of himself with Mike. He’ll slip it in with Mike’s belongings and hope that at some point, his dad will look at it and remember. Mike still has moments where he recalls here and there. Sonny needs hope right now, so he’ll count on at least a few more of them.

In an interview with Soap Opera Digest, Maurice Benard talked about how upsetting it is to play such tear-jerking material with Max Gail. “It’s heartbreaking every time we have a scene, and it’s not fake heartbreaking,” Benard said. “It hurts my heart.” Benard added that although Sonny knows what he has to do, it’s unbelievably painful. Sonny’s saying the first of his goodbyes and that’s just devastating.

“It’s tough,” Benard admitted. “It hurts him deeply. Coming to the decision when you finally have to put a loved one somewhere is incredibly difficult.” He indicated that Sonny will struggle, so expect some “pretty intense” scenes as he processes all this with Carly.