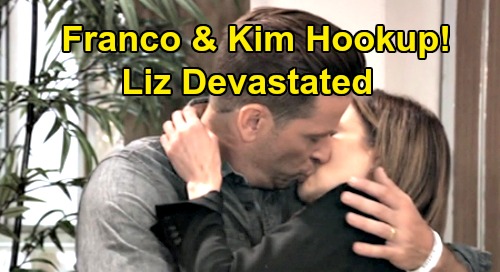 General Hospital (GH) spoilers tease that Kim Nero (Tamara Braun) will find herself drawn to the comfort and familiarity of the past. Kim was clearly shaken as Franco Baldwin (Roger Howarth) shared memories in incredibly accurate detail. He feels everything Drew Cain (Billy Miller) felt in 2012, so he’s head over heels for Kim.

Of course, that puts Kim in a strange situation. This is her friend’s husband! Kim has a sweet bond with Elizabeth Baldwin (Rebecca Herbst) and certainly doesn’t want to add to her distress right now. GH fans know Kim also bonded with Franco a bit recently. They had a nice chat as Cameron Webber (William Lipton) took ownership of Oscar Nero Quartermaine’s (Garren Stitt) car.

Julian Jerome (William deVry) suggested this Franco-Drew drama was all the more reason to leave town, but Kim didn’t seem so sure. She’s still overwhelmed at this point, but things will start to shift soon. General Hospital spoilers say Kim will get caught up in her history. She’s been a mess over all her Oscar grief, but she’ll find peace in the past she shared with Drew.

Kim might reflect on some old memories of her own and pull out some mementos. That could be the first sign of trouble – both for Kim and Julian’s relationship as well as Franco and Liz’s marriage. General Hospital spoilers say Franco’s Drew won’t give up on Kim. He obviously adores her, so he’s not just going to throw in the towel and stay away.

Kim is still vulnerable since she’s in mourning. She’s doing a little better lately, but a setback could be brewing. That’s because the real Drew is about to face major drama. Billy Miller’s exit is rapidly approaching, and it looks like we’ll be dealing with a presumed death or at least a mysterious disappearance.

If General Hospital indeed takes the presumed death route, it’ll be another tough blow for Kim. She just lost her son and now she’ll be losing his father. We can only imagine what kind of toll that’ll take on her mind. Kim will plunge back into a place of vulnerability, which could give Franco’s Drew the opening he needs.

Of course, Franco will get some advice along the way. Liesl Obrecht (Kathleen Gati) will have a chat with Franco, although he obviously won’t remember her. Even so, Liesl will offer guidance and most likely contend that Franco should focus on Liz. She may suspect that Franco will regret it if he dismisses this marriage.

Nevertheless, Franco will ignore Liesl’s words of wisdom on August 27. That same day Kim will let Liz’s call go to voicemail. It sounds like they’ll be together as the temptation builds. On August 28, Franco will disappoint Liz. An easy way to do that would be to land in Kim’s bed, which may be where this storyline’s headed.