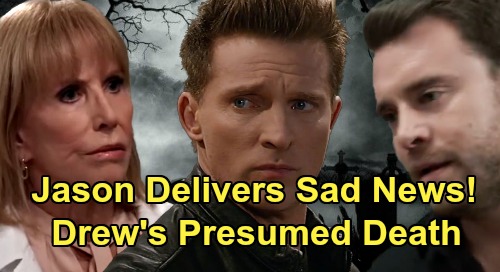 General Hospital (GH) spoilers tease Shiloh Archer (Coby Ryan McLaughlin) will look for a way out of his latest mess. Shiloh isn’t a quitter, so he’ll have another shocking trick up his sleeve. We could see Shiloh do some strategizing on Monday, August 19. That’s when Constance Towers will reprise the role of Helena Cassadine in a revealing flashback.

Helena will interact with Shiloh in this blast from his past, so he may mull over the Drew Cain (Billy Miller) handoff. However, Shiloh may also know more than he’s letting on. Could he remember something that might improve his situation? Shiloh will need a bargaining chip, so he’ll undoubtedly come up with one.

Robert Scorpio (Tristan Rogers) suggested Franco Baldwin (Roger Howarth) would have to live within Drew’s memories or risk a vegetative state. There’s a good chance another round of memory-mapping wouldn’t work anyway, but Franco would be taking a gamble to even try. It’s been the same deal for the real Drew, who turned down his chance at those memories because he didn’t want to lose his new ones with his kids.

However, could there be some kind of workaround? Shiloh might find some way to dangle a surefire memory recovery. Even if it’s not true, Shiloh could claim it is and perhaps target someone vulnerable who wants to help…someone like Cameron Webber (William Lipton).

Cam feels terrible for inadvertently bringing Franco into this and blowing up his family. If there’s even a glimmer of hope when it comes to making things right, Cam could be tempted to try. GH is keeping a tight lid on Billy Miller’s exit details, but it’s clear that we’ll see a series of shockers.

During the week of August 19-23, Shiloh will push for an exchange. He may escape and try to lure Cameron into his web again. Cam might go for the idea if he believes he can bring the real Franco back somehow.

General Hospital spoilers say Drew will rush to find Cameron soon after Shiloh’s proposal. That could mean the exchange will actually be a hostage situation. It could also be a trap if Shiloh’s plan to reel Cam in flops. Some lies on Shiloh’s part could still lead Drew to believe Cam’s in danger. Sonny Corinthos (Maurice Benard) will hear about an issue at his warehouse next, so we could be gearing up for a dangerous battle.

There’s no word on Drew’s fate just yet, but we have some new clues. General Hospital spoilers say the week of August 26-30 will bring a difficult task for Jason Morgan (Steve Burton). He’ll have a tough conversation with Monica Quartermaine (Leslie Charleson), so that certainly sounds like it could be about Drew’s presumed death.

Will Jason break the terrible news that Drew’s dead and gone? He may have to support Monica through this awful blow. Whatever the case, General Hospital spoilers say Drew’s exit is rapidly approaching. We’ll give you updates as other GH info emerges. Stay tuned to the ABC soap and don’t forget to check CDL often for the latest General Hospital spoilers, updates and news.