General Hospital Spoilers: Kim Begs Drew to Have a Baby, Give Oscar a Sibling 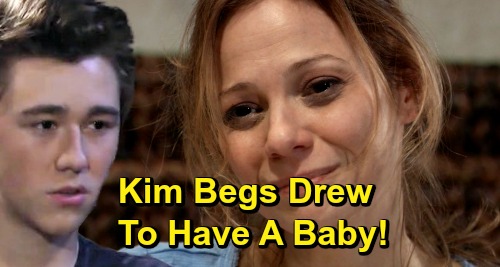 General Hospital (GH) spoilers reveal that Dr. Kim Nero (Tamara Braun) just got an idea, but it’s obviously not a good one. GH fans know Kim had a fainting spell due to altitude sickness. She was given some drugs that led to confusion and a heartbreaking hallucination. Kim imagined Drew Cain (Billy Miller) was her dead son, Oscar Nero Quartermaine (Garren Stitt), so Drew played along.

However, the interesting part is what Kim said to “Drewscar.” She pointed out that she would’ve loved to have been a real family with Oscar and Drew. Kim even mentioned how they might’ve given Oscar a little brother or sister. She brought up the suggestion to herself once again after the fog started to clear.

Now let’s look at some General Hospital spoilers that could tie in with this. On June 18, Kim will reach a place of desperation. She’ll deliver a distraught plea, which could be to Drew. Will Kim beg Drew to have another baby with her? It sounds like she’ll latch on to this younger sibling for Oscar idea and refuse to let go.

No child could ever replace Oscar, and Kim will know that on some level. Nevertheless, this seems like an attempt to fill the void in her heart. Kim is drowning in grief, so the idea of bringing new life into the world is awfully appealing. Plus, Kim will likely believe having Drew’s baby would keep he connected to Oscar somehow.

Of course, Julian Jerome (William deVry) would have some huge issues with this. He’s in a committed relationship with Kim for starters, but it’s also just unhealthy. It’s easy to see what Kim’s doing, so Julian may try to lead her down a better path to healing.

Although it’s doubtful Kim would ask to do things the old-fashioned way, even artificial insemination would be weird for Julian. If Kim indeed picks Drew as her potential “baby daddy,” Julian may wonder why she’s not even considering him. He wouldn’t want to feed her negative coping strategy anyway, but the snub could still prove quite telling to Julian.

Drew would undoubtedly turn Kim down, but what if she shifts her strategy? The idea alone could be enough to drive Julian and Kim apart. General Hospital spoilers say Kim will deal with some mixed signals on June 25. She’ll also catch Drew off guard the next day. Will Kim sense that the moment’s turning romantic? Will she make her move with Drew and hope lovemaking follows?

Kim could be headed off the deep end if this keeps up! Since this is a soap, we wouldn’t put it past her to get her hands on Drew’s sperm somehow. Kim might take matters into her own hands if it comes down to it. We’ll give you updates as other news comes in. Stay tuned to ABC’s and don’t forget to check CDL often for the latest General Hospital spoilers, updates and news.