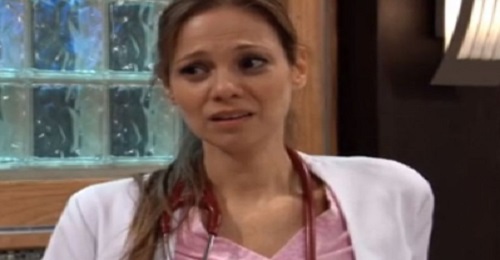 General Hospital (GH) spoilers reveal that Kim Nero’s (Tamara Braun) behavior has caused many fans to turn against her. In fact, it’s leading some viewers to wonder if the character can even be saved at this point. Could Kim be headed for the exit? It wouldn’t be surprising when you look at her latest actions as well as the character’s history as a whole.

In the beginning, Kim was a pretty flat and emotionless character. She was somewhat mysterious and that made it difficult to get to know her. Kim opened up over time, but that led to complications like Oscar Nero’s (Garren Stitt) tumor rewrite. It’s obvious that wasn’t GH’s plan from the beginning, but we have to go with what they ultimately wrote. Kim hid the truth about Oscar’s condition from him for way too long.

Of course, it was easy to have sympathy for Kim after Oscar’s death. She was in mourning and that was completely understandable. However, most grieving moms don’t drug their former flames in hopes of making a replacement baby. Kim went too far when she tried to sleep with drugged Drew Cain (Billy Miller) and being in mourning was no excuse.

Kim clearly needs help, and the current situation with Franco Baldwin (Roger Howarth) serves as more proof. He can call himself Drew and share all the memories he wants, but that doesn’t change who he actually is. No matter your feelings about Franco, it doesn’t give Kim the right to take advantage of him.

Franco isn’t in his right mind through no fault of his own. His memories were forced out of him, so he’s not Drew by choice. If Franco could remember his love for Elizabeth Baldwin (Rebecca Herbst) and their family, he certainly wouldn’t be pursuing Kim right now. Franco will undoubtedly be horrified down the road when he realizes he slept with Kim while “Drew” was in charge of his body.

That’s why this betrayal is really on Kim. She knows exactly what she’s doing unlike Franco, whose mind has been manipulated into believing he’s a different person. On Twitter, General Hospital fans have been voicing their outrage over Kim and this phase of the storyline.

“Franco isn’t in control, therefore he can’t give consent,” an angry viewer said. “Assault is not exciting, it’s gross!” One fan insisted, “Kim is wrong on many levels…” Another fan added, “You are writing her as the most despicable, delusional, disgusting person.” “This is no romance. It’s abuse. I want Liz 2 drag her 4 filth,” said one more disappointed GH watcher.”

General Hospital spoilers say Kim may continue to make poor choices when it comes to Franco and her friendship with Liz. The show seems to be trashing the character, so is anything salvageable? Are they planning to write Kim out? We’ll give you updates as other GH news comes in. Stay tuned to the ABC soap and don’t forget to check CDL often for the latest General Hospital spoilers, updates and news.