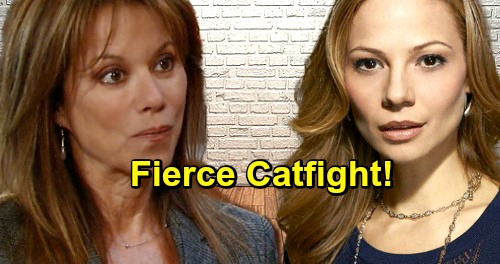 Oscar’s two birth parents, Kim, and Drew Cain (Billy Miller) were kissing after Kim told Drew that Oscar had been conceived on New Year’s Eve, right before Drew was deployed. As Kim explained to Liz Webber (Rebecca Herbst) later, they just got caught up in sentimentality and it meant nothing for the present day.

But with Julian still caught up in his own grief over his niece Kiki’s (Hayley Erin) murder, and Kim caught up in worry over Oscar, and naturally spending more time with Drew, circumstances set up a major malfunction in Kim and Julian’s relationship and he assumed she’d left him for Drew.

General Hospital spoilers say that Alexis will overhear Drew tearing into Julian over leaving Kim, and then Alexis, being the interfering ex-wife tries to fix things for Julian by going to see Kim in her office.

Alexis tells Kim she wasn’t the one Julian slept with, if anyone at all, and then Kim tears into her with an astute observation: there’s always going to be this “thing” in the background between Alexis and Julian, and it will always interfere with any other relationship!

Of course, the same thing could be said about herself and Drew now, but Alexis doesn’t remind Kim of that. Bonding over a terminally ill son is much more noble anyway, than obvious baggage between exes.

Alexis does make herself rather obvious by flying to Julian’s side every time he has a problem in his life, even though she denies any residual romantic feelings she has for him!

Will this scenario lead to a revived Julexis and a Drim – or will Julian and Kim make up, possibly after Alexis goes to Julian still trying to patch Julian and Kim up? Time will tell – which pairings are you rooting for, Julexis, Drim, or Jim? Keep watching General Hospital and checking out General Hospital spoilers on CDL frequently to keep up with the latest news!