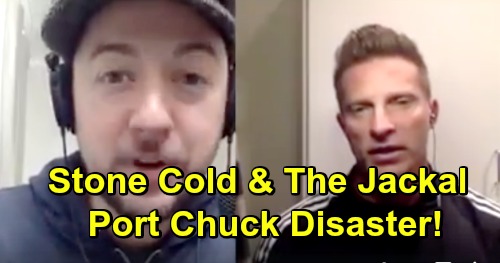 General Hospital (GH) spoilers are sharing an announcement by two of GH’s favorite stars. Steve Burton (Jason Morgan) and Bradford Anderson (Damien Spinelli) shared some disappointing news on social media. Of course Burton and Anderson never disappoint as Stone Cold and The Jackal on GH but real life can throw some surprises that stymie even our crime solving General Hospital team.

Port Chuck was scheduled to perform for the Tour for a Cure, which supports the Sandy Rollman Ovarian Cancer Foundation. However, circumstances beyond their control has forced them to cancel.

On Twitter and Facebook, Burton and Anderson posted a short video. Even though fans are disappointed about the Port Chuck cancellation, they were also understanding.

The “GH” stars explained that it is due to a computer malfunction. After locating the missing computer, they tried to get the song tracks off the hard drive. However, they were unable to do so. They even went as far as to get a computer technician (Spinelli???) to help out. Unfortunately, the files were all corrupted.

The Port Chuck members thought about recording the tracks again. But with more than 20 songs, that would have been an impossible feat, Burton explained.

“That being said, 20-plus tracks was gonna be almost impossible to get recorded, mastered and done over the holidays in time to put together a kick-ass show that we couldn’t have done it in time anyway.”

Although Port Chuck fans were disappointed by this news, they expressed understanding in the comments on social media. The General Hospital stars did everything they could to make it happen. But sometimes situations are simply out of anyone’s control.

Keep watching the ABC soap to find out what happens next on GH episode. Come back to CDL often for the latest General Hospital spoilers, updates and news.

Hey friends, :( we ran into some unforeseen issues with the Port Chuck tour and, with the heaviest of hearts, have to cancel. Our deepest appreciation to all of you who were excited to see us. We explain here & BIG Thanks to @srocf https://t.co/87P2l2sIEt