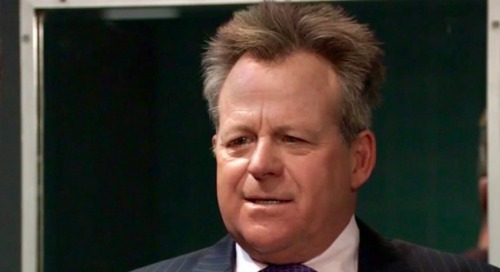 General Hospital (GH) spoilers reveal that one ABC soap star underwent a procedure on his foot, but he still showed up to do his job! GH fans might’ve noticed Scott Baldwin (Kin Shriner) whizzing around on a scooter recently. It caught many viewers off guard, but there’s a good reason Scott – or more specifically his portrayer – needed a set of wheels.

Shriner addressed the issue with a couple of tweets on June 25. First, he poked fun at the situation and mentioned that it was a significant day to be onscreen. “Color TV #OnThisDay debuted 68 years ago today,” Shriner said. “I was lucky to be on @GeneralHospital today. Scotty on scooter and all to celebrate anniversary !!”

Naturally, plenty of General Hospital fans were curious why Scott had to scoot around. ““Had 4 hour foot surgery 2 weeks prior,” Shriner replied to a viewer. “But the show must go on @GeneralHospital !!!” Shriner was hopefully able to get around without too much pain. The scooter didn’t affect Scott’s scenes other than providing a little confusion for those tuning in.

It was nice of Shriner to keep the drama going strong and show up during his recovery. General Hospital is a well-oiled machine, and that’s because the cast and crew work hard to deliver day after day. Fans respect the effort they put into the show and greatly appreciate it.

Shriner certainly received lots of support from viewers concerned about his mending foot. “Thanks so much for sharing Kin,” one fan said. “I’m grateful and I know others are too. I’m hoping the leg is better soon. Keep on scootering for now. Blessings.” Another GH watcher said, “Hope you heal fast and you can be back on your Vespa soon.” Let’s hope Shriner’s already getting back to his usual activities!

As for what’s next in Port Charles, General Hospital spoilers say Scott has some fun material coming up next week. Some romantic surprises are in Scott’s future, so some exciting shockers and shakeups are brewing. We’ll give you updates as other GH news comes in. Stick with the ABC soap and don’t forget to check CDL often for the latest General Hospital spoilers, updates and news.

Color TV #OnThisDay debuted 68 years ago today.I was lucky to be on @GeneralHospital today.Scotty on scooter and all to celebrate anniversary !! pic.twitter.com/S7EC1ix3XR

Unfortunately was unable to ride with local Vespa riders for the big day #VespaClubusa the 2019 parade any @GeneralHospital riders out there ??? pic.twitter.com/fQUb0N0OHZ