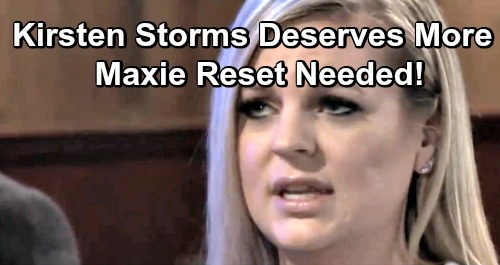 Maxie and Peter bonded as they sought the truth, but there’s been a strange shift lately. Is it just us or does Maxie not seem as into him anymore? General Hospital spent months building to this pairing, but maybe they plan to head in another direction.

Peter and Maxie awkwardly agreed they could go back to their own lives now, which they may or may not do. It’s possible GH is dragging things out for drama’s sake, but there was also that significant episode with Chet Driscoll (Chris Van Etten). Maxie has a real spark whenever she’s around Chet, so Lulu Falconeri (Emme Rylan) couldn’t help but notice. She commented on all the flirting between them.

Whether Maxie ends up with Chet or not, that proves she’s got options. In fact, this might be a good time for General Hospital to hit the Maxie reset button. Kirsten Storms did a great job with her part in Nathan West’s (Ryan Paevey) exit story, but maybe she needs a solid one of her own. Since Maxie seems on the fence about Peter despite her declaration that she has ‘feelings’ for him, GH could easily veer in a fresh direction.

Some General Hospital fans are still rooting for a Maxie and Michael Corinthos (Chad Duell) pairing. Harrison Chase (Josh Swickard) has found love with Willow Tait (Katelyn MacMullen), but who knows how long that’ll last? It seems like puppy love that’ll lead to heartbreak, so Chase would be another good option for Maxie down the road. There are definitely some Chase and Maxie shippers out there.

Bottom line, Storms is a popular GH cast member and the show might want to take advantage of that. Why not give Maxie an exciting new love story and maybe some cool Crimson projects? She’s just propping Nina’s story right now, so it’s be fun to see something just for Maxie.