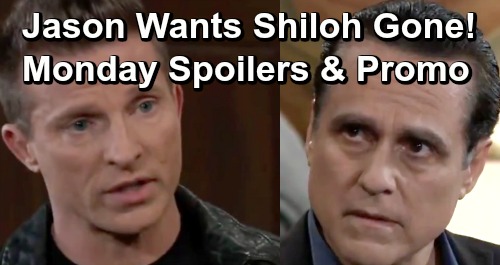 General Hospital (GH) spoilers for Monday, April 8, tease that Dr. Hamilton Finn (Michael Easton) will be awfully nervous. As he sits next to Anna Devane (Finola Hughes), Finn will suggest that there’s something he wanted to ask her. Of course, GH fans know Finn intends to pop the question. He showed Harrison Chase (Josh Swickard) the engagement ring he picked out, but Anna has to say yes first.

Unfortunately, Finn’s proposal will get derailed. It seems someone will walk over and interrupt before he can ask Anna to marry him. Finn will just have to wait for a better moment – perhaps a more private one!

Meanwhile, Maxie Jones (Kirsten Storms) and Peter August (Wes Ramsey) will try to figure out where they stand. She just turned down Chet Driscoll’s (Chris Van Etten) date offer, but Peter wants to know why. Maxie will admit it’s because she has feelings for Peter, so he’ll be ready if she’s ready.

However, Maxie still won’t be sure exactly where that leaves them. It’s been a while since she did the whole dating thing, so she may need Peter to walk her through this gently. Over with Alexis Davis (Nancy Lee Grahn), she’ll have another interesting chat with Dr. Neil Byrne (Joe Flanigan). This guy must be floored and fascinated every time Alexis reveals another crazy detail about her life.

It’ll be Kristina Corinthos-Davis (Lexi Ainsworth) who becomes the topic of conversation on Monday. Alexis will explain that her daughter is in a cult, so Neil may wonder if she’s sure about that. General Hospital spoilers say Alexis will be pretty positive. Now that Dawn of Day has completely taken over Kristina’s life, Alexis will be certain that she’s been brainwashed and needs a way out.

Other General Hospital spoilers say Kristina will allude to some big plans. That’ll leave Sam McCall (Kelly Monaco) curious and concerned. She’ll ask her sister what exactly is going down tonight. Kristina will seem a bit uneasy, so she may be wary of sharing much info with Sam. “The Trust” is a very exclusive group at DoD, so Kristina won’t want to risk ruining her induction.

Nevertheless, Sam will gather enough information to know there’s trouble. She’ll feel like she has to do something before Kristina gets in any deeper. At the elementary school, Shiloh Archer (Coby Ryan McLaughlin) will arrive and announce that he has something that belongs to Willow Tait (Katelyn MacMullen). Maybe it’ll be some old possession Willow left behind or a token of DoD significance.

Regardless, Chase won’t let Shiloh hang around long. General Hospital spoilers say he’ll get in Shiloh’s face and make it clear that Willow’s off-limits. She wants nothing to do with Dawn of Day not, so Chase will warn Shiloh to leave her alone.

Across town, Jason Morgan (Steve Burton) will think it’s time to act. He’ll tell Sonny Corinthos (Maurice Benard) that the longer they wait, the worse this gets. Jason and Sonny will plan to make a move against Shiloh soon, so stay tuned.