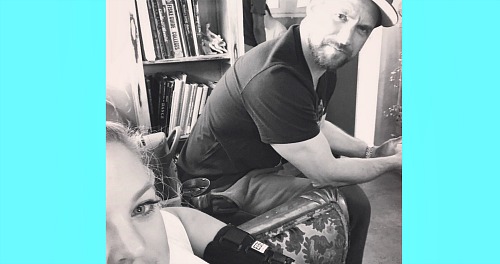 General Hospital (GH) spoilers has some fun news to pass on about a GH star and her family. Kirsten Storms who portrays Maxie West on the ABC soap, recently shared an Instagram post from her daughter Harper’s dance class studio. In the past, Kirsten and her ex Brandon Barash (Stefan DiMera, Days of Our Lives) have been able to watch their daughter’s dance classes, but now that Harper is older, parents aren’t allowed in class.

Kirsten shared a photo of herself with Brandon (who is now sporting a beard) in the waiting area of the dance studio along with the following caption: “Harper has officially moved on to a dance class that we aren’t able to sit and watch. Now I’m stuck hanging out with this guy…(@BrandonBarash #thebeardisback).”

Kirsten has received quite a few replies in response to her post, many of whom have praised Kirsten and Brandon for their commitment to harmonious co-parenting. One follower said: “You guys got the co-parenting down. It’s nice to see!”

And another commented: “I just wanted to say congratulations to you both for being able to co-parent in such a healthy way and come together and do things with your daughter. It’s an amazing thing you guys get to do that.”

Other followers found some humor in the situation. “I wish that I could have hung out with Brandon,” one person said. And another said: “It could be worse, it could be Shiloh,” along with several LOL emojis. Of course, this person was referring to the Shiloh Archer (Coby Ryan McLaughlin) character from GH, clearly comparing him to the villain played by Brandon on Days of Our Lives.

At any rate, it’s great to see Kirsten Storms and Brandon Barash uniting to support their daughter as she moves on to a much more grown-up dance class. Both Kirsten and Brandon are active parents and frequently post on social media about what Harper is up to and what they’re doing to support her in her extracurricular activities, so we can expect more updates, and probably more “hanging out” posts from outside Harper’s dance class.

Do you enjoy seeing Kirsten and Brandon’s co-parenting updates on social media? Stay tuned to the ABC soap and don’t forget to check CDL often for the latest General Hospital spoilers, updates, and news.

Harper has officially moved on to a dance class we that we aren’t able to sit and watch 😭 Now I’m stuck hanging out with this guy…(@BrandonBarash #thebeardisback) https://t.co/qyMYVplxer