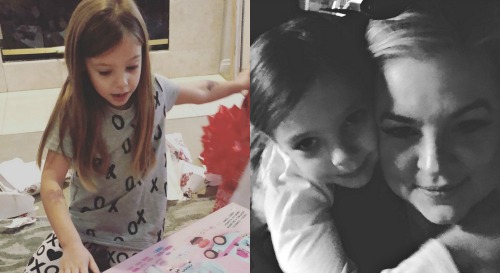 General Hospital (GH) spoilers has some fun news to pass on about a popular GH star and her adorable daughter, Harper Rose Barash. As you might know, Kirsten Storms, who portrays Maxie Jones on the ABC soap, has a young daughter named Harper. Harper is nearly five years old and is by all accounts a happy, active little girl.

As you might know, Harper’s dad is Brandon Barash, who portrayed Stefan DiMera on Days of Our Lives, as well as Johnny Zacharra on GH. Kirsten and Brandon are no longer together, but they are two absolutely devoted co-parents. They frequently post social media updates about how Harper is doing and what she’s up to.

Well, recently, Kirsten posted some Instagram updates about Harper, indicating that the little girl had a great Christmas this past week. In the first two pictures, Harper is shown unwrapping a Christmas gift, clearly ecstatic about the toy she received. It looks like a L.O.L Surprise! 2-in-1 Glamper, which is a camper toy for the L.O.L. line of dolls.

Kirsten has posted about Harper’s love of the L.O.L. dolls in the past, so this toy looks like a major deal for her. Kirsten’s caption for the pictures reads: “1st pic – that moment when you realize Santa brought you what you asked him for. 2nd pic – solely posted for her facial expression. #MerryChristmasHarperRose.”

Some of Kirsten’s soap star friends responded to the cute photos and in particular Harper’s enthusiasm for the great gift from Santa. Alison Sweeney, who portrays Sami Brady on DOOL, commented: “OMG!! Adorable!!” And Laura Wright, who portrays Carly Corinthos on GH, said: “Ohhh – this is the BEST.”

Kirsten’s fans have also weighed in on the cute pictures. “What a cool Mom! Great photos of Harper’s reactions,” one fan said. And another commented: “My daughter got one as well. Same facial expression too, LOL.”

Later, Kirsten posted a sweet black-and-white photo of herself and Harper together snuggling, along with the following caption: “Blurry (parked) car photo moment. #mysnugglebug.” Harper is definitely photogenic, and you can tell from the picture just how close she and her mom are.

It’s great to see that Harper had a great Christmas and we hope she’s having fun playing with that LOL Glamper! Stay tuned to the ABC soap and don’t forget to check CDL often for the latest General Hospital spoilers, updates, and news.

1st pic – that moment when you realize Santa brought you what you asked him for. 2nd pic – solely posted for her facial expression. #MerryChristmasHarperRose