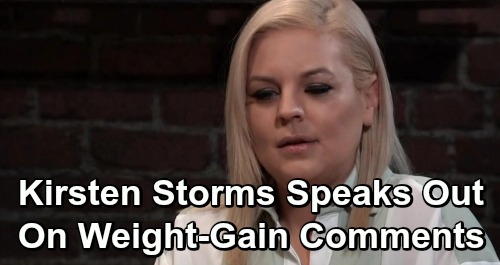 General Hospital (GH) spoilers reveal that one ABC soap start is speaking out against hateful fans. On Instagram, Kirsten Storms (Maxie Jones) enjoys sharing great pics of herself and what she’s up to. She’s always providing updates on the young daughter she shares with Brandon Barash (ex-Johnny Zacchara on GH, Stefan DiMera on Days of Our Lives). We all love hearing about sweet Harper!

Unfortunately, a fun post sparked some negative comments about Storms’ body. Storms snapped a quick pic while out shopping at Target, but some fans twisted it into a conversation about her weight gain. There were suggestions that it couldn’t possibly be a new picture since certain viewers thought Storms looked thinner.

It’s rude and uncalled for to criticize soap stars with cruel messages. Storms was just out buying some shoes for her daughter. There’s no need to turn that into an attempt to make Storms feel bad about herself. Fortunately, Storms didn’t let any of the drama get to her. She stood up for herself and made it clear where she stands on the issue.

For starters, Storms wanted to make it clear that it was indeed a new photo. She also offered a message for fans who just have to chime in on stuff like this. If people only want to discuss how big or small someone is, they need to butt out and worry about their own lives.

Storms said, “I’ve gained a lot of weight since this afternoon when I took this picture? Look, I know what she was saying with her comment. Details about my health and medical conditions are nobody’s business, so I won’t go into my temporary weight gain to satisfy anyone’s thirst. However, I will say that it’s sad to see some people focus only on the status of my body…”

Storms went on to say that passing judgement on someone’s weight is shameful. She insisted she’s healthy and feels good, so that’s all that really matters. Storms quickly got some support from her General Hospital costars, including Maurice Benard (Sonny Corinthos) and Laura Wright (Carly Corinthos).

“It’s easy for people to criticize because it makes them feel a certain way,” Benard said on Twitter. “Don’t judge until you’ve lived in someone’s shoes Kirsten is not only absolutely beautiful, but more importantly, incredibly brave.” Wright also tweeted, “Ohhh my Beautiful sister !!!!! We’ve got your back !!! It’s crazy what some people post on our social media feeds !!! Xoxoxoxo”

Let’s hope some fans can learn to be nice and concentrate on positivity next time! As for what’s next in Port Charles, General Hospital spoilers say Maxie will work hard to help Lulu Falconeri (Emme Rylan) cope with a crisis. We’ll keep you posted as other GH news comes in. Stay tuned to the ABC soap and don’t forget to check CDL often for the latest General Hospital spoilers, updates and news.

@target shopping for Harps. My kid looooves shoes (she gets that from her Daddy), but she goes thru them like it’s her job. The boots I bought her for Christmas already have holes in them and she is still rockin’ em. Oh to be 5 yrs old… Rainy day outfit: Black Levi skinny jeans, Black Frye “Billy” Cowboy Boots, Led Zeppelin Tee, Black Jean Jacket & a messy top knot. Purse is my Grandma’s Gucci bag from the 70’s that I just had reconstructed (thanks to @barinileather for making it look new again! 🙌🏼).