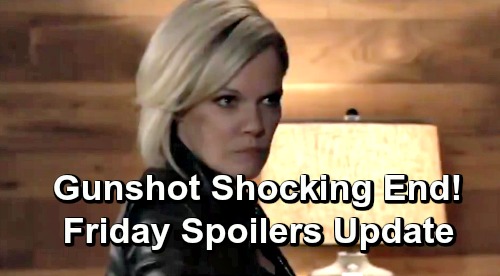 General Hospital (GH) spoilers update for Friday, May 24, tease that Shiloh Archer (Coby Ryan McLaughlin) will be on the verge of taking what he wants. Sam McCall (Kelly Monaco) is drugged and totally out of it, so Jason Morgan (Steve Burton) may be her only hope. Shiloh took Sam to the tower, where he’s preparing to have sex with Sam as part of her creepy initiation.

As Sam remains limp in his grasp, Shiloh will insist that everything’s been building to this. He’ll feel like this is the culmination of all their lessons and bonding sessions. Back at the DoD house, Sonny Corinthos (Maurice Benard) will seek answers from Margaux Dawson (Elizabeth Hendrickson). Jason raced out in a hurry, so Sonny won’t be sure where to find the menacing cult leader.

However, Sonny will believe Margaux may have some ideas. He’ll wonder if they can work out some sort of deal. Sonny will just want to know where Shiloh might’ve taken Sam if he wanted to hide out. Margaux may be hesitant to divulge much, but she could provide a hint eventually. Regardless, Jason seems poised to save the day – perhaps through a vicious attack on Shiloh.

General Hospital spoilers say a roughed-up Shiloh land at GH in the near future. This might be the encounter that puts him there. We should mention that a gun will fire in Friday’s episode. That could be Jason pumping a bullet into Shiloh, but Ava Jerome (Maura West) shooting Ryan Chamberlain (Jon Lindstrom) is more likely. She’s already taken aim, so she’ll be ready to pull the trigger soon.

Ryan will push Ava to accept that they’re meant to be together. He’ll feel like they belong to each other, but Ava knows that’s not true. This is the man who killed Kiki Jerome (Hayley Erin) and slept with Ava for an alibi!

Ava will absolutely want Ryan to die, but Jordan Ashford (Briana Nicole Henry) could really use his kidney first. In a conversation with Laura Webber (Genie Francis), Curtis Ashford (Donnell Turner) will declare that Ryan is Jordan’s only chance. She won’t pull through unless she gets a new kidney immediately and it appears Ryan’s her last shot at a match.

Other General Hospital spoilers say Lucy Coe (Lynn Herring) will have an idea. She’ll think she has a way to offer assistance, so this might tie in with the search for Ryan and Ava. Speaking of that search, a clue will bring Harrison Chase (Josh Swickard) a step closer. Lulu Falconeri (Emme Rylan) will grow curious as Chase mulls over some new info. Will Chase figure out where Ava and Ryan are at?

Finally, Julian Jerome (William deVry) will lay down the law. After Brad Cooper (Parry Shen) reveals the new concerns about Shiloh, Julian will worry Brad’s going to do something stupid. He’ll refuse to let Brad blow up the baby swap secret, so he’ll want to get a few things straight. Julian will order Brad to keep his mouth shut. He won’t want Brad breathing a word about the switch story.

General Hospital spoilers say Brad will be more nervous than ever. Even Julian is in the dark on the real identity of “Wiley Cooper-Jones.” The truth about Jonah Corinthos will be exposed down the road, so stay tuned. We’ll give you updates as other GH news comes in. Stick with ABC soap and don’t forget to check CDL often for the latest General Hospital spoilers, updates and news.