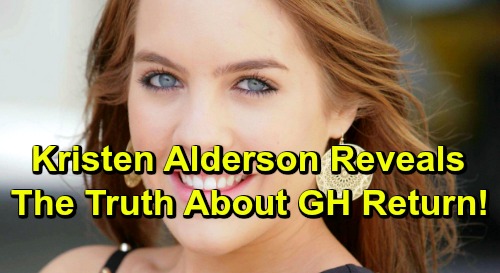 General Hospital (GH) spoilers has some news to pass on about the possible return of a GH star. Kristen Alderson, who portrayed Starr Manning and Kiki Jerome on the ABC soap, was recently the subject of an online rumor that she may be returning to General Hospital.

The whole thing was started by Kristen Alderson herself when she tweeted the following on Valentine’s Day: “Happy Valentine’s Day everyone!! Guess what?? I’m doing something really fun today & it has to do with @GeneralHospital. Any guesses!?”

In response to that tweet, many fans got excited and hoped that Kristen was referring to a General Hospital return – not the first time Kristen has teased a comeback as Starr Manning. Instantly, fans were imagining a Star Manning reprisal, or even the possibility that Kiki Jerome somehow survived her Ryan Chamberlain (Jon Lindstrom) attack and would be portrayed once again by Kristen.

All the excitement started some rumors that Kristen would be returning to General Hospital, and one fan even questioned Kristen on Twitter about it. The fan wrote: “@krisalderson: there’s a rumor you may be returning to GH…any truth to that? I’d be so ecstatic if that happened lol.”

Kristen was quick to reply and shut down the rumor. Kristen wrote: “No truth to it. The rumor started because I said that I did something ‘with General Hospital.’ But it was just the podcast with the guys from General Hospital.”

The podcast that Kristen is referring to is one that she did with her former GH co-stars Steve Burton (Jason Morgan) and Bradford Anderson (Damian Spinelli). Their podcast, Stone Cold and the Jackal, can be heard regularly at www.stonecoldandthejackal.com. Kristen appeared on the February 20 edition of the podcast.

So, while fans were disappointed that Kristen is not returning to General Hospital, at least they can hear her on the Stone Cold and the Jackal podcast this week! Fans should be sure to listen, as Kristen discusses growing up on One Life To Live, her tenure on General Hospital, and what she’s doing now.

Have you listened to Kristen on the podcast yet? Stay tuned to the ABC soap and don’t forget to check CDL often for the latest General Hospital spoilers, updates, and news.

No truth to it. The rumor started because I said that I did something “with General Hospital”. But it was just the podcast with the guys from General Hospital🙃 https://t.co/zQvCVpWc44

Thanks to everyone who listened to the podcast today & sent me their sweet comments about it!🥰 So glad that you guys liked it!🤗 If you haven’t listened yet, I posted the link below.💕#ThatsAwesomeWithSteveandBradford