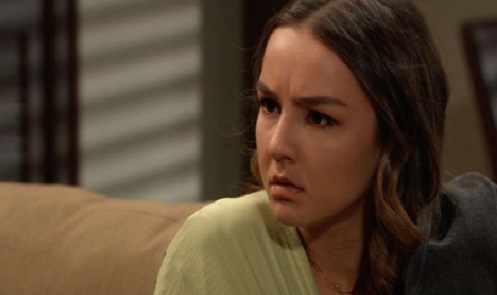 Molly won’t buy Alexis’ lie that Kristina left town on her own, so her comments will get the cops thinking. Chase and Valerie will assume Kristina’s family is behind her vanishing act. Of course, proving it will take some work. Chase will do his best to convince Michael Corinthos (Chad Duell) to open up, but that angle will get him nowhere. Michael will refuse to put Kristina or his loved ones at risk.

Valerie’s digging won’t pay off at first either, but she’ll get a lucky break soon. General Hospital spoilers say Alexis will leave her phone unattended, so Kristina will snatch it up and make a call. Naturally, Kristina will reach out to her former friend the detective. She cut Valerie out of her life for criticizing Dawn of Day, but she’ll trust that Val will still step up for her.

GH fans can expect Valerie to be concerned by the call. She won’t hear much before Alexis grabs the phone again, but she’ll hear enough to know Kristina’s in trouble. At that point, Chase and Valerie will pool their information and determine that Kristina is indeed being held hostage by her family. They’ll realize they need to take drastic action, so they’ll decide to open an official police investigation.

The move should bring worries for both Valerie and Chase. Valerie knows DoD is shady, so she may understand that Kristina’s fam is just trying to help. At the same time, this is illegal and Val must right the wrong. As for Chase, he’ll fret about keeping Willow Tait (Katelyn MacMullen) safe and helping her avoid any legal ramifications. Chase won’t want Willow incriminated in any way.