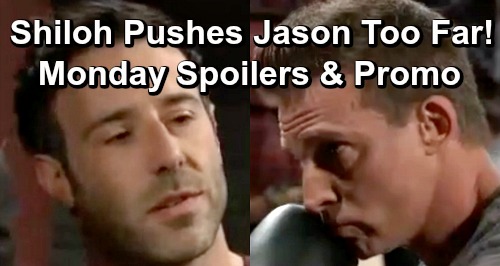 General Hospital (GH) spoilers for Monday, April 22, tease that Scott Baldwin (Kin Shriner) will wonder what kind of plan Ava Jerome’s (Maura West) cooking up. Franco Baldwin (Roger Howarth) was Ava’s first choice for a fake boyfriend, but he insisted it wasn’t happening. Now it’s time for Ava to make her pitch to Scott, but he’ll reject the offer as well.

Fortunately, Dr. Kevin Collins (Jon Lindstrom) will eventually take on the role of pretend beau. However, he’ll have a special delivery to open first. Kevin just got a package from Ryan Chamberlain (Jon Lindstrom), so it’s pretty easy to guess what’s inside. General Hospital spoilers say Laura Webber (Genie Francis) will recoil in horror over what we can assume is Ryan’s severed hand.

Over with Molly Lansing-Davis (Haley Pullos), she’ll still be trying to figure out what the heck’s going on. Molly’s worried about Kristina Corinthos-Davis (Lexi Ainsworth), so Alexis Davis (Nancy Lee Grahn) will admit she hasn’t been completely honest with her. Since T.J. Ashford (Tajh Bellow) will be standing next to them, Alexis probably won’t confess too much. She’ll just try to placate Molly as best she can.

At the safe house, Kristina will be frustrated during her exit therapy. Dr. Neil Byrne (Joe Flanigan) will assure Kristina that her voice is equal in all this. He’ll promise he won’t let the others drown out how she feels and what she needs to process. Of course, Kristina won’t buy any of that. She’ll counter that if her voice were really equal, Neil would let her go.

Across town, Sam McCall (Kelly Monaco) will keep up her efforts to take Shiloh Archer (Coby Ryan McLaughlin) down. While she works on that at the DoD house, Shiloh will corner Jason Morgan (Steve Burton) at the boxing gym. Jason will take his anger out on a punching bag as Shiloh talks about how much he trusts Sam and how close they’re getting. It should be tough for Jason to keep from smacking Shiloh in the face, but he’ll try.

Other GH spoilers say Sonny Corinthos (Maurice Benard) will talk to Sam and Carly Corinthos (Laura Wright) about Kristina’s pledge. He’ll want to make sure it never sees the light of day, but Alexis is the one who would be hurt by exposure. Nevertheless, Sonny will do whatever he can to keep the dark secret Kristina shared under wraps.

Elsewhere, Michael Corinthos (Chad Duell) will be on cloud nine after his hookup with Sasha Gilmore (Sofia Mattsson). They couldn’t resist indulging in a little passion, so Michael will feel good about where this could lead. Carly will encounter Sasha in Monday’s episode and exchange introductions with her, so Michael will just have to hope his mom behaves herself!