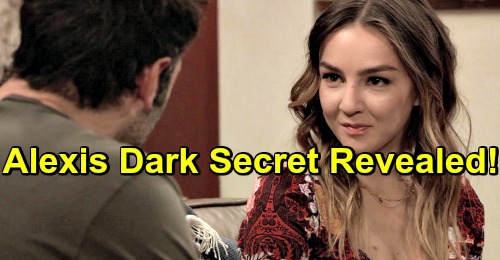 General Hospital (GH) spoilers reveal that Kristina Corinthos-Davis (Lexi Ainsworth) has made a huge mistake. Technically, she’s already made several! Trusting Shiloh Archer (Coby Ryan McLaughlin) was her first and worst one, but Kristina has made more along the way. She recently cut Valerie Spencer (Brytni Sarpy), Molly Lansing-Davis (Haley Pullos) and Alexis Davis (Nancy Lee Grahn) out of her life.

However, Kristina’s latest mistake will cause chaos for her family. After a huge fight with Molly and Alexis, Kristina went back to the DoD community house. Shiloh had already been pushing her to share her trust offering. If Kristina wants to join this exclusive level of Dawn of Day, she’ll have to prove she trusts Shiloh and the others. That means divulging a dark secret that no one else knows.

Kristina was angry over that confrontation we mentioned, so that probably fueled what she spilled. As she spoke into the recorder, Krissy explained that this secret involved a member of her family. General Hospital spoilers say Alexis is the family member she’s ratting out. Since Shiloh suggested this had to be something nobody had heard before, it may be a total surprise to GH fans.

Whatever Kristina has recorded should come back to bite not only her, but Alexis and her sisters. It’s clear that Shiloh uses this trust offering to control those he considers his property. Shiloh wants Kristina to become part of that manipulated club, so this will help move things along. Unfortunately, Kristina won’t see what’s going on until it’s too late.

Of course, Kristina could still get a taste of Shiloh’s sinister side soon. During the week of March April 1-5, General Hospital spoilers say a line will be crossed. Kristina will go too far somehow, which might anger Shiloh. GH viewers saw the creepiness ramped up considerably during his confrontation with Willow Tait (Katelyn MacMullen). Shiloh can be a real menace when he wants to be.

Sam McCall (Kelly Monaco) will also be working hard to get Kristina out of this cult. Kristina’s family will try to pitch in as well. What happens if Kristina finally gets a clue and wants out? That fateful trust offering could be what Shiloh uses to control her. Kristina may fear the trouble it would bring if the truth became public. It might be something that would tank Alexis’ career or even put her behind bars.