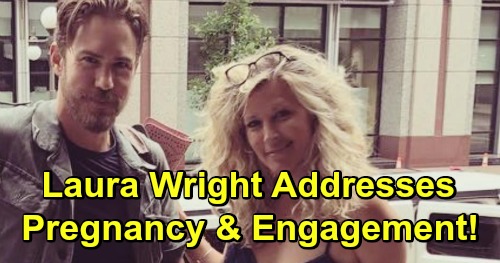 General Hospital (GH) spoilers tease that Carly Corinthos (Laura Wright) will try to keep her stress levels at low as possible for her baby’s sake. That’s not an easy task in Port Charles! Carly already went through a stressful nightmare thanks to Ryan Chamberlain (Jon Lindstrom), but she’ll hope things will settle down now. It’s undoubtedly just wishful thinking, but at least Carly’s doing her best.

Of course, baby storylines often lead to speculation about the leading ladies involved in them. Soaps sometimes write in pregnancies when an actress is expecting, so that usually leaves people curious. Laura Wright has definitely faced plenty of questions about whether or not she’s actually expecting a bundle of joy.

In fact, Wright got grilled so much that she decided to address the matter on Instagram. She posted a cute pic of herself along with her boyfriend, Wes Ramsey (Peter August), and made a statement that cleared up any suspicions fans might’ve had. Wright’s caption said, “Ohh I love this man but WE ARE NOT PREGNANT!! Only Carly!! Thank you for loving and support us though #notpregnant #livininsin”

However, some GH viewers out there still wanted some exciting news. One fan asked if they were at least engaged, but Wright shot that idea down, too. Ramsey and Wright are perfectly happy the way things are – for right now anyway. If they do end up deciding to get married down the road, you can bet they’ll post plenty of photos and fill everyone in.

Wright may not be engaged or pregnant, but her character’s still got lots of drama headed her way. General Hospital spoilers say Carly will have to support Josslyn Jacks (Eden McCoy) through a rough ordeal. Joss will lose Oscar Nero (Garren Stitt) soon, so that’ll take a toll on the teen. Carly will do whatever she can to support Josslyn as she battles heartbreak and tries to move on.

Jasper “Jax” Jacks is also headed back to General Hospital, so it’ll be fun having Josslyn’s father and Carly’s ex in the mix again. That could create some great story opportunities for Carly as well, so stay tuned. We’ll give you updates as other GH details emerge. Stick with the ABC soap and don’t forget to check CDL often for the latest General Hospital spoilers, updates and news.

Ohh I love this man but WE ARE NOT PREGNANT!! Only Carly!! Thank you for loving and support us though 🙏🏻❤️💕 #notpregnant #livininsin #wr