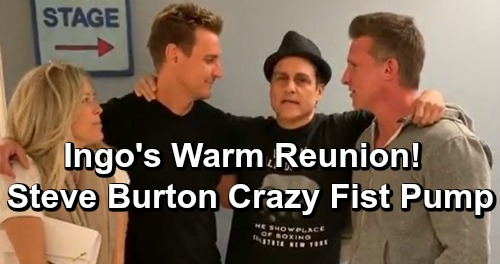 General Hospital (GH) spoilers reveal that an upcoming return led to some fantastic reunions. You’ve probably heard by now that Ingo Rademacher is headed back to the ABC soap as Jasper “Jax” Jacks. He started shooting new scenes during the week of March 25-29, so that led to some great behind-the-scenes content.

Rademacher was spotted hanging out with Laura Wright (Carly Corinthos), Maurice Benard (Sonny Corinthos) and Steve Burton (Jason Morgan). Benard posted a video on his Instagram account where they welcomed Rademacher back and shared a few laughs.

The clip started off with some confusion about what they were doing. Rademacher thought they were posing for a photo, but Benard wanted to make a video so he could say a few words. Wright joked about Benard’s love for sharing things on Instagram before they made some heartfelt statements about having Rademacher on set again.

Benard, Wright and Burton are certainly thrilled about Rademacher’s long-awaited return. “We’re so happy that Ingo’s back and we love him,” Benard said. Wright chimed in with, “He came back home!” “We ARE happy Ingo’s back,” Burton said. It’s clear that these GH costars have a lot of love for one another. Make sure to check out Steve Burton’s crazy fist pump below!

This video naturally got General Hospital fans excited about what’s ahead for the gang. It’ll be interesting to see what the show has in store for Jax’s comeback stint. As CDL was first to report, you can bet part of Jax’s story will involve supporting Josslyn Jacks (Eden McCoy), who’s about to suffer a tough loss. Oscar Nero (Garren Stitt) is set to die soon, so Jax will want to help in any way he can.

Based on the timing, it seems like Rademacher has been filming May sweeps along with the rest of the cast. General Hospital spoilers say that timeframe will bring some serious drama. Of course, Jax will have to get updates on Carly’s bun in the oven once he’s back in PC. It should be fun to see Jax’s reaction to Carly’s pregnancy. Perhaps Jax can even comfort Carly if things ultimately go awry.

It sounds like there’s plenty to look forward to on General Hospital! We’ll keep you posted as other GH news comes in. Stay tuned to the ABC soap and don’t forget to check CDL often for the latest General Hospital spoilers, updates and news.

Reunited and it Feels so. GOOD 👨‍👩‍👧‍👦#friends