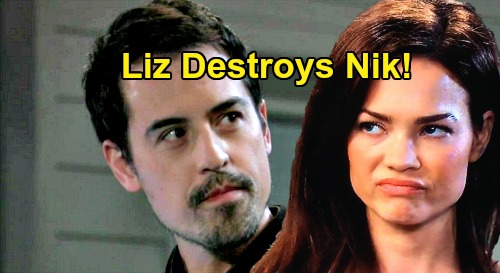 General Hospital (GH) spoilers tease that Elizabeth Baldwin (Rebecca Herbst) will turn her attention to another loved one soon. GH fans know Liz has been pretty wrapped up in Franco Baldwin’s (Roger Howarth) drama – and rightly so. Liz had no way of knowing if Franco would wake up as himself or even wake up at all. It was all she could do to keep herself together during that waiting game.

However, Franco has returned and is living his own life again. That’s great news, but what about Liz’s sister? Liz was thrilled to have Hayden Barnes (Rebecca Budig) back in town, but now Hayden has vanished and left behind little Violet Barnes (Jophielle Love). You can bet that’ll lead to questions, but the real answers won’t come until after Nikolas Cassadine (Marcus Coloma) is exposed.

General Hospital spoilers say Nik’s comeback will affect “Friz” in a surprising way. That could mean Liz will start grilling the right people and uncover the shocking reason Hayden left Port Charles. Jasper “Jax” Jacks (Ingo Rademacher) would certainly be willing to rat Jax out when this is all over. He was furious when he realized Nikolas had tricked Hayden into thinking there was a serious threat.

You can bet Liz will be furious as well! Nik is the reason Hayden felt she had no choice but to take off and abandon her beloved daughter. Hayden left Violet with her loving daddy, Hamilton Finn (Michael Easton), but Violet’s always had her mommy by her side. It’ll be tough for Violet to find a new normal without Hayden around.

Of course, there’ll be a long line of angry PC residents waiting to confront Nik once his faked death is exposed. Liz will undoubtedly join the fury club and rip into Nikolas with everything she’s got. Sadly, there are seemingly no plans to bring Hayden back anytime soon. Nik won’t be able to undo his mistake when this codicil mess is finally finished.

That’s only going to add to Liz’s outrage, so she’ll need Franco to be her rock throughout the crisis. At least they can take comfort in knowing Franco’s back where he belongs. General Hospital spoilers say some hot drama’s brewing, so don’t miss all the action. We’ll give you updates as other GH details emerge. Stay tuned to the ABC soap and don’t forget to check CDL often for the latest General Hospital spoilers, updates and news.