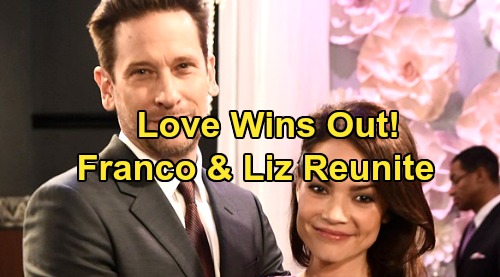 General Hospital (GH) spoilers tease that Elizabeth Baldwin (Rebecca Herbst) will hold out hope for the “Friz” family. She had a wonderful life with Franco Baldwin (Roger Howarth) and her boys, but Shiloh Archer’s (Coby Ryan McLaughlin) evil plan ripped it all away. Now Franco has Drew Cain’s (Billy Miller) old memories and wants nothing to do with this new life as Franco.

However, Liz is convinced she can get through to her husband. She believes she can get Franco on board with the procedure, but General Hospital spoilers say that’s just hurdle number one. Andre Maddox (Anthony Montgomery) pointed out there could be significant risks – the worst one being that Franco could end up in a vegetative state.

Franco’s Drew memories could also intensify thanks to this procedure. There’s even the possibility it could have no effect at all. Nothing is guaranteed here, but Liz has to keep fighting for her man. She loves Franco and wants to get their future together back on track.

Of course, Peter August (Wes Ramsey) could still pose a threat to Andre, which could put this memory reversal plan in jeopardy. Will Andre really get a chance to complete the procedure? Time will tell, but Franco will undoubtedly recall his love for Franco no matter what.

GH fans know the real Drew had moments of familiarity with Kim Nero (Tamara Braun). He also had strange instincts about the money in Cameron Webber’s (William Lipton) car. Drew didn’t have memory flashes exactly, but his memories were obviously buried in there somewhat. This is all very experimental, so not everything could be erased if we go by Drew’s admissions and actions.

With Franco, he’s got an especially good shot at remembering. Franco didn’t go through a major memory wipe like Drew, so Andre’s procedure will likely work if he’s actually able to do it. Even if Peter strikes again and stops Andre, Franco’s memories are still within him. The power of Liz’s love could bring them back down the road!

General Hospital spoilers say love will almost certainly prevail in the end. Liz should get Franco back and finally get the bliss she’s seeking – at least until the next round of Port Charles chaos hits. We’ll give you updates as other GH news comes in. Stay tuned to the ABC soap and don’t forget to check CDL often for the latest General Hospital spoilers, updates and news.