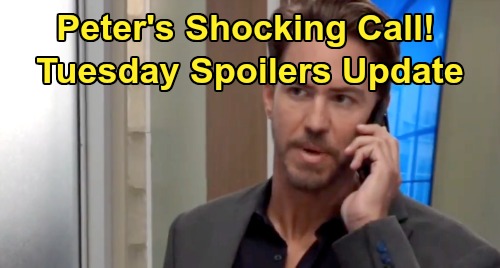 General Hospital (GH) spoilers update for Tuesday, September 10, tease that Kim Nero (Tamara Braun) will have a run-in with Elizabeth Baldwin (Rebecca Herbst)). Things won’t get heated, but Liz will want to set Kim straight about Franco Baldwin (Roger Howarth). She’ll feel confident she’s going to get her husband back eventually, so she’ll advise Kim to pull away for her own sake.

Liz will suggest that if Kim heads down this road, she’s just going to face more heartbreak. Kim may act like she’s not interested in a future with Franco, but her feelings are indeed growing. At Charlie’s Pub, Julian Jerome (William deVry) will keep ranting about Brad Cooper’s (Parry Shen) deception. Now that Julian knows “Wiley Cooper-Jones’” real identity, he’s furious with Brad for dragging him into this.

Nevertheless, what’s done is done. Brad will acknowledge that he stole Sonny Corinthos’ (Maurice Benard) grandson, but he’ll want Julian to focus on their main issue. Liesl Obrecht (Kathleen Gati) poses a serious threat in Brad’s eyes. He’ll think killing Liesl is the only way to ensure the secret stays safe, but Julian will obviously have reservations.

Other General Hospital spoilers say Sonny will get support from Carly Corinthos (Laura Wright). She’ll push Sonny to be honest with himself about something, so it’ll be interesting to see what it is. This may tie with Dev Cerci (Ashton Arbab) or perhaps Mike Corbin (Max Gail). Regardless, Carly will think an admission from Sonny would be best for everyone.

Meanwhile, Michael Corinthos (Chad Duell) will be in loving brother mode. He’s always there when Josslyn Jacks (Eden McCoy) needs him, and Tuesday’s GH episode will serve as the perfect example. Michael will reassure Joss as she struggles another round of grief. She’ll feel like she should be moving on by now, Michael will insist that mourning takes a long time.

Monica Quartermaine (Leslie Charleson) will also have some mourning to do soon. Jason Morgan (Steve Burton) will explain that the wreckage of Drew Cain’s (Billy Miller) plane was found. There were no signs of survivors, so Monica will realize what this means. She’ll fear Drew is dead, and that’s a possibility his loved ones will indeed have to face.

Of course, Peter August (Wes Ramsey) can be a pretty tricky character. He might’ve had someone kidnap Drew to hold him captive. A presumed death leaves General Hospital with some options, so that’s great news for Drew fans.

However, Peter definitely wanted Andre Maddox (Anthony Montgomery) dead – as evidenced by those stab wounds and Peter’s menacing trip to the ICU! On Tuesday, Peter will get on the phone and rant at his secret helper. He’ll wonder why Andre’s still alive and seethe over the botched murder.